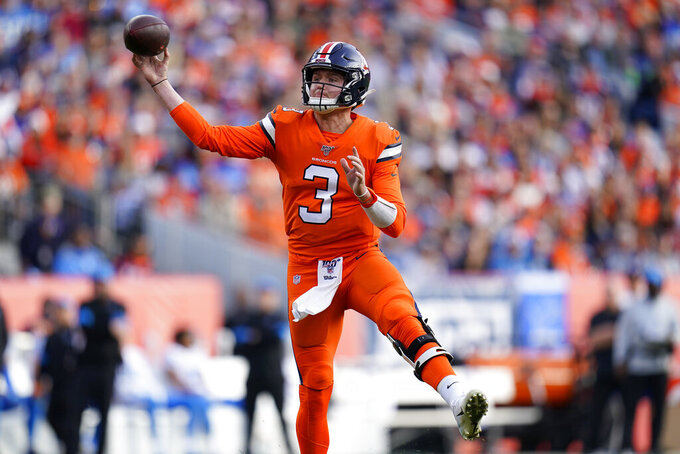 Denver Broncos quarterback Drew Lock (3) throws against the Detroit Lions during the first half of an NFL football game, Sunday, Dec. 22, 2019, in Denver. (AP Photo/Jack Dempsey)

So they called an Uber driver. Jake Rodgers didn't even charge them surge pricing, either.

The journeyman Rodgers, who's relied on the ride-hailing service in the past to make ends meet, was summoned from the sideline Sunday against Detroit when Elijah Wilkinson hobbled out of the game with an ankle injury. Rodgers, who's been a backup most of the season, received a high rating for his work — along with a game ball.

The offensive line could be a makeshift unit again Sunday in Denver's regular-season finale against Oakland. Ja'Wuan James said he will not play because of a torn ligament in his left knee and Wilkinson remains questionable. Ron Leary is sidelined by a concussion.

Rookie Dalton Riser figures to be back at left guard after being pulled at halftime in a win over Detroit because of the flu. He just didn't have the stamina and took a seat for Patrick Morris, who played in his first NFL game.

Morris performed well, too. The jumbled offensive line kept rookie quarterback Drew Lock safe all afternoon. They also opened up big holes for Phillip Lindsay, who rushed for 109 yards and a game-sealing score.

Hence, a game ball for Morris and Rodgers, a player who's been released/waived around a dozen times throughout his career.

"He went out there and did a great job," Lindsay said of Rodgers. “He had to sit the whole year and then got thrown in there ... he was prepared.”

For that, Rodgers credits a resilient spirit. Since finishing his career at Eastern Washington, Rodgers has bounced around the league. He's been signed and let go by Atlanta, New York Giants, Carolina, Pittsburgh (several times), Los Angeles Chargers, Houston, Baltimore and briefly even by Denver. But the Broncos brought him back to their practice squad on Sept. 2 and 12 days later added him to the active roster.

In between all the signings and releases, Rodgers stayed in shape by working out with a personal trainer. To defray the costs, he's at times relied on Uber as he drove his GMC Yukon around Spokane, Washington.

"I felt like I was ready when the opportunity presented itself,” Rodgers said.

He may be in there again this weekend. Possibly Austin Schlottmann, too, who was filling in for Leary at right guard.

With Risner's health improving, that may not be the case with Morris, a player Denver signed on Dec. 3 after he was waived by Pittsburgh.

"I look at this as just the beginning," said Morris, who was brought in by the Steelers as a 2018 undrafted free agent out of Texas Christian. “Hopefully I look back at it in 12 years and say, 'That's where it all started.' It was fun to be back out there.”

Riser fully expects to be back in the lineup. He only reluctantly exited Sunday after dealing with the flu.

"I felt tired. I felt weak. I felt like I had no energy to be able to move a 300-pound man down the field," Risner explained. “Better every single day.”

There are powerful incentives on the line for the Broncos this weekend: They have a chance to finish the season with two straight wins, run Lock's record as a starter to 4-1 and ruin the Raiders' flickering postseason chances.

“There's something special getting built around here,” Risner said. "I've bought into that and I think a lot of guys have as well.”

And that's partly why James is shutting it down. He's got a balky left knee and wants to take the time to get it healed for 2020. James, who signed a four-year, $51 million deal in the offseason, was limited to three games this season. His plan to is to avoid surgery, begin rehab on the knee and return next season to show he was worth the investment.

“Not even from a money standpoint,” James said. “Just from a standpoint of I wanted to come here and make an impact on this team."

NOTES: A Denver native, Lindsay said he appreciates being so close to family around the holidays. “I do a pretty good job at getting the presents around. Hopefully they like them this year,” he cracked. ... CB Chris Harris Jr. reflected Tuesday on this possibly being his final time suiting up for the Broncos. He was signed by Denver as a college free agent in 2011. “I'm just so thankful for the Broncos. I had a great nine years here,” Harris said.