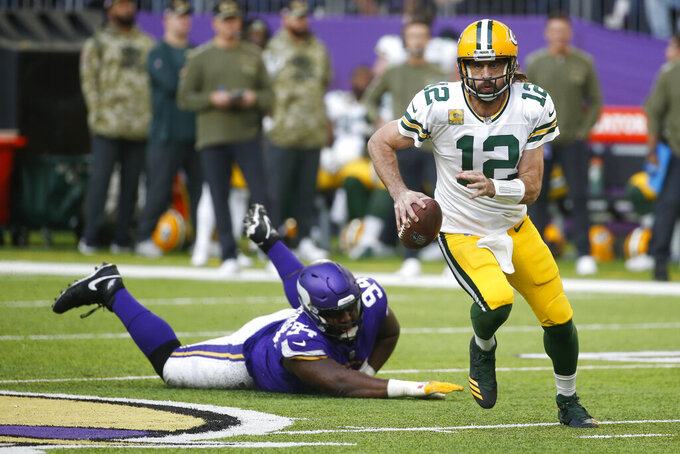 OPENING LINE: Packers by 1, according to FanDuel Sportsbook.

TURNOVER DIFFERENTIAL: Rams plus-3; Packers plus-7.

RAMS PLAYER TO WATCH: WR Cooper Kupp. A knee injury prevented him from playing in the Rams’ playoff loss to the Packers last year. He’s healthy now and is having a spectacular season. Kupp has 85 catches for 1,141 yards to lead the NFL in both categories. His 10 touchdown receptions put him in a tie for the NFL lead with Tampa Bay’s Mike Evans.

PACKERS PLAYER TO WATCH: OT Yosh Nijman. He’s the Packers’ starting left tackle for the foreseeable future because of injuries to 2020 All-Pro David Bakhtiari and Elgton Jenkins. Bakhtiari hasn’t played since tearing his left anterior cruciate ligament on Dec. 31. Jenkins is a 2020 Pro Bowl guard who had been filling in for Bakhtiari at left tackle before suffering his own knee injury Sunday to knock him out for the season. Nijman did start three games at left tackle earlier this season when an ankle injury sidelined Jenkins.

KEY MATCHUP: Packers WR Davante Adams vs. Rams CB Jalen Ramsey. This matchup features two of the league’s top players at their respective positions. Both were All-Pros last season. Adams has 72 catches for 979 yards and five TDs this season. Ramsey has picked off three passes.

SERIES NOTES: The Packers have won six of the last seven meetings in this series, including the playoff matchup in January at Lambeau Field. The Rams’ only win in that stretch was a 29-27 home triumph on Oct. 28, 2018. Rodgers threw two touchdown passes and had a 1-yard touchdown run in the playoff victory over the Rams last season. Rodgers went 23 of 36 for 296 yards in that game.

STATS AND STUFF: The Rams are returning from an off week attempting to avoid a third consecutive loss. The Rams have lost three straight just once during McVay’s five-year coaching tenure. McVay owns a 3-1 record in games that followed back-to-back losses. … The Rams have allowed just 15 sacks this season. Only the Tampa Bay Buccaneers and Minnesota Vikings have given up fewer sacks. … The Rams’ defense has r 29 sacks to tie for fourth place in the league. … The Rams have been penalized just 48 times, the second-lowest total in the league behind Cincinnati. … Since winning seven straight games, the Packers have lost two of their last three. … The Packers and Buccaneers are the only NFL teams that are undefeated at home this season. … The Packers have allowed just 44 points at home this year. That’s the lowest total they’ve yielded through their first four home games of a season since 1969. … Adams had two TD catches in the Packers’ loss at Minnesota. … Packers OLB Preston Smith had two sacks at Minnesota and now has five over his last four games. He already has exceeded his 2021 sack total of four. … Rodgers and Rams QB Matthew Stafford have faced each other many times when Stafford played with the Detroit Lions from 2009-20. Rodgers owns a 12-4 record in head-to-head matchups. … The Packers pursued Rams WR Odell Beckham Jr. after his release from Cleveland, but the three-time Pro Bowl selection picked Los Angeles instead. Beckham wasn’t much of a factor in his first game with his new team, catching two passes for 18 yards. He still hasn’t caught a touchdown pass all season. … Packers coach Matt LaFleur was the Rams’ offensive coordinator in 2017. LaFleur and McVay also worked together as assistants at Washington for four seasons. … Packers defensive coordinator Joe Barry was the Rams’ assistant head coach/linebackers coach from 2017-20. … The Packers acquired P Corey Bojorquez from the Rams just before the start of the season.

FANTASY TIP: Green Bay K Mason Crosby has missed eight of his last 14 field-goal attempts. He had made a franchise-record 27 straight before this slump.