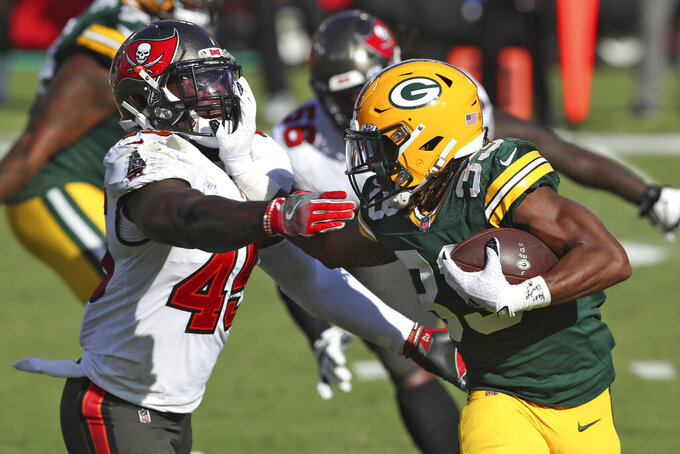 The injury kept Jones from practicing Friday. He had practiced all week up to that point.

“Just kind of felt my calf get tight during (Thursday’s) practice,” Jones said. “I really didn’t pay it much attention, and then after and throughout the later parts of the day is when I started feeling it.”

Green Bay's injury report listed Jones as questionable. Packers coach Matt LaFleur said “we’ll give him up to game-time to see if he can do it or not.”

“I feel like I’m confident I can play,” Jones said. “But I know our trainers and doctors have the players’ best interests in mind. I’m going to do everything in my power to make sure I can get out on the field, but it’s up to the team doctors.”

Jones has run for 389 yards and five touchdowns on 75 carries this year. He also has 18 catches for 161 yards and two more scores. His seven total touchdowns this season put him in a four-way tie for the NFL lead with New Orleans’ Alvin Kamara and Minnesota teammates Adam Thielen and Dalvin Cook.

Since the start of the 2019 season, Jones has 26 total touchdowns, the most in the NFL during that stretch.

Bakhtiari and Savage haven't practiced all week after getting injured in a 38-10 loss at Tampa Bay.

The Packers haven’t indicated how they would shuffle their line if Bakhtiari can’t play. They used Rick Wagner at left tackle after Bakhtiari got hurt against Tampa Bay. Left guard Elgton Jenkins started at right tackle in the season opener and is versatile enough to play left tackle if necessary.

King practiced on a limited basis Wednesday and Thursday but didn't practice at all Friday. Josh Jackson started in his place at Tampa Bay.