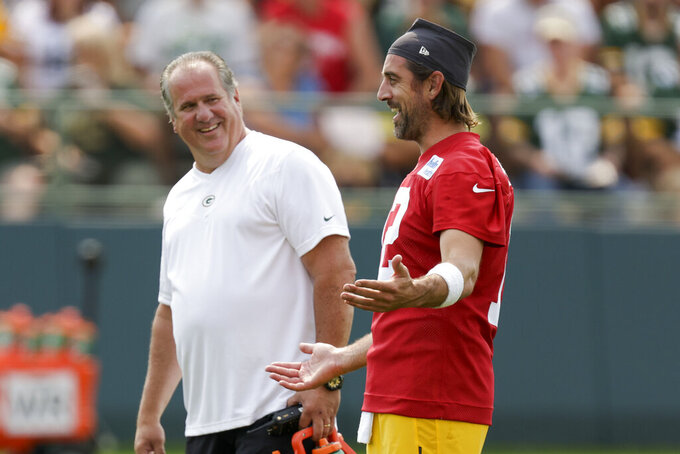 Green Bay Packers quarterback Aaron Rodgers said his relationship with general manager Brian Gutekunst is a “work in progress,” but he has nothing but affection for the man Gutekunst drafted as his possible replacement: backup Jordan Love.

Rodgers returned to the Packers last week, reporting on time for training camp after an offseason in which he made clear he was unhappy with the organization. The three-time MVP skipped Green Bay's organized team activities and mandatory minicamp, and he acknowledged he doesn’t know whether he will be back with Green Bay next season, saying he just wants to focus on this year.

Love took the majority of reps at minicamp and likely would have been the Packers' starter this season if Rodgers hadn't returned, a situation for which Rodgers has some sympathy. Rodgers did his part by staying in touch with his understudy.

“I didn’t hold things from him,” Rodgers said Wednesday. “I let him know where I was at mentally and what I was thinking about. And hopefully he appreciated that. I just felt that’s what I would want in that situation, just to hear from the guy.”

As for Gutekunst, the conversation hasn't always flowed as freely, but Rodgers said their recent communication has been positive.

“Relationships aren’t formed in a matter of a couple days,” Rodgers said. “There’s time where the respect grows and the communication follows. I think the greatest relationships that you have with your friends and loved ones involved conversation and flow. You can not talk to a close friend for a few months and pick up right where you left off. There’s no break in communication, there’s no forced conversations or you’ve got to hit this person up because it’s on your to-do list that day.

Both men last week used the word “professional” to describe their relationship.

The 37-year-old Rodgers said last week that his concerns included wanting to have a voice in the Packers’ decision-making process and believing the organization didn’t treat departing high-character veterans with enough respect. He also had expressed an interest in helping the Packers recruit free agents.

Those words had an immediate an impact when the Packers brought back one of Rodgers' former favorite targets, Randall Cobb, a move Gutekunst said he wouldn't have made without Rodgers' input.

On the practice field, Rodgers has looked like himself, without obvious signs of rust. He is coming off an MVP season in which he threw a league-high 48 touchdown passes with only five interceptions. He led the NFL in passer rating and completion percentage while directing the NFL's highest-scoring offense.

“I mean, he’s the best in the game,” receiver Marquez Valdes-Scantling said. “It’s Aaron Rodgers. There’s no other way to put it.”

Rodgers' consistent excellence notwithstanding, the Packers drafted Love in the first round of the 2020 draft, a surprising move that contributed to the rift between Rodgers and the team.

Because of the uncertainty surrounding Rodgers, Love has no way of knowing when or if he'll take over as the Packers' starter.

Rodgers has been there. He spent three seasons backing up Brett Favre, who spent two consecutive offseasons pondering retirement, before taking over in 2008.

“There’s a love and an appreciation and a friendship there, just like it was with me and Brett,” Rodgers said. “So I wanted to make sure I checked in with him and let him know I was thinking about him. That was important for me and it’s not going to change. I have a lot of respect and love for Jordan, and I understand it’s got to be tough what he went through.

NOTES: Coach Matt LaFleur said linebacker Kamal Martin suffered a “slight injury” during Tuesday’s practice but said the 2020 fifth-round pick from Minnesota “will be OK.” Martin played inside linebacker last season, but the Packers have been experimenting with him at outside linebacker following an injury to Randy Ramsey. ... The Packers signed defensive lineman Josh Avery and activated linebacker Ray Wilborn from the reserve/COVID-19 list.