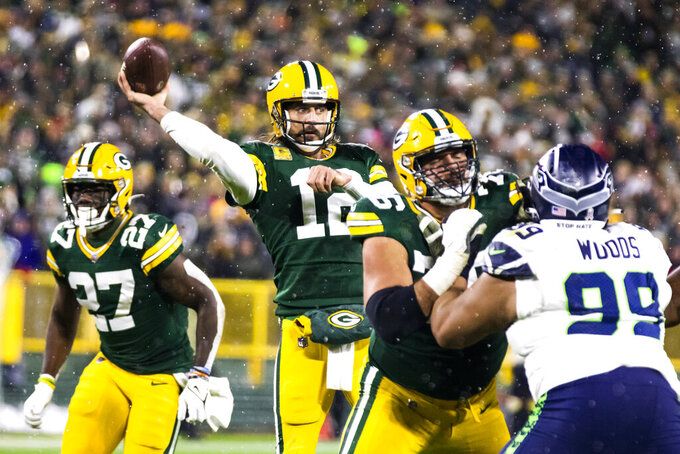 GREEN BAY, Wis. (AP) — Green Bay Packers quarterback Aaron Rodgers returned to practice on a limited basis Friday after missing the last two days due to a toe injury as he prepares for Sunday’s game at Minnesota.

Rodgers didn’t have a designation on the Packers’ injury report Friday. The reigning MVP had said Wednesday even after missing that day’s practice that he would definitely play against the Vikings.

“He looked good throwing the football," Packer coach Matt LaFleur said after Friday's practice. "I’m confident that he’ll be in a good place on Sunday.”

Rodgers hasn’t practiced much at all since testing positive for COVID-19 on Nov. 3. The positive test forced him to miss the Packers’ 13-7 loss at Kansas City on Nov. 7 and prevented him from practicing in the days leading up to Green Bay’s 17-0 victory over the Seattle Seahawks on Sunday.

Although Rodgers did play against Seattle, he wasn’t as sharp as usual. Rodgers went 23 of 37 for 292 yards with no touchdown passes and one interception. Green Bay didn’t score a touchdown until the fourth quarter of that game.

While Rodgers will be playing Sunday, the Packers again will be without offensive tackle David Bakhtiari. The 2020 All-Pro left tackle was activated from the physically unable to perform list last week, but didn’t practice all week and was ruled out for the Vikings game.

Bakhtiari still hasn’t played since tearing the anterior cruciate ligament in his left knee on Dec. 31.