Patriots feeling 'not far off' after loss to Buccaneers 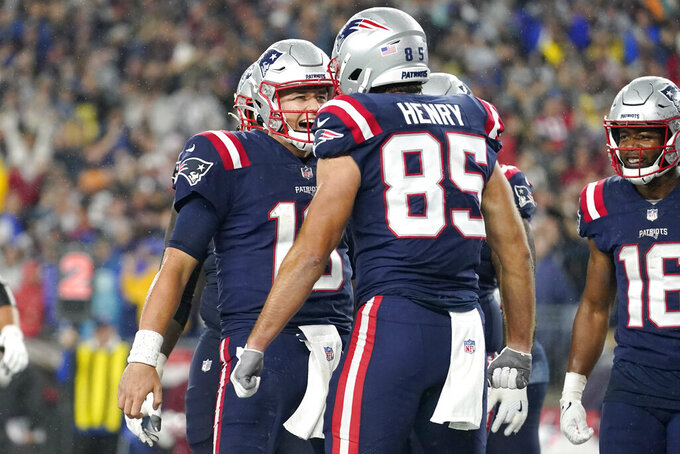 Instead, it clanged off the left upright, cementing a 19-17 loss to the defending champion Tampa Bay Buccaneers on Sunday that underscored another night of missed opportunities for a Patriots team that fell to 1-3 for the first time since 2001.

New England’s defense was stout, holding its third opponent this season under 20 points. Rookie quarterback Mac Jones looked like a veteran at times opposite a future Hall of Famer, throwing a pair of TD passes to push Brady and the Bucs to the brink.

Yet the Patriots walked off the field lamenting lingering issues on offense, including costly turnovers, an ineffective run game and poor performance on third down.

There were also things to build on for a team that still has plenty of time to improve on last year's 7-9 record.

For starters, Jones finished 31 of 40 for 275 yards — all season highs. He had one interception, but it came on a tipped ball after linebacker Devin White got a free run on the quarterback.

Jones also had a stretch where he completed 19 straight passes, tying Brady for the longest streak in a single game by a Patriots quarterback in the past 30 years. Brady did it in Week 1 of the 2015 season against Pittsburgh.

It’s a sign Jones is getting comfortable in the offensive system and is successfully reading defenses.

“I think we moved in the right direction,” Jones said. “We moved the ball, passing well and the run game needs to improve and we’ll come up with ways to do that.”

What might be most important is that through four games, Jones has the confidence of his teammates.

“He keeps showing he’s got some guts. It’s an honor to get to play with a guy like that,” center David Andrews said. “We just have to find a way to win.”

When New England has turned to gadget plays on offense the past two seasons, receiver Jakobi Meyers has usually been involved.

He made his latest contributions Sunday, completing a 15-yard pass to Brandon Bolden in the second quarter and then executing a 30-yard flea-flicker pass to Nelson Agholor in the fourth to set up Folk’s 27-yard field goal that put the Patriots in front 17-16.

Over the past three seasons, the former high school quarterback is 4 for 4 passing for 88 yards and two touchdowns.

The Patriots are typically one of the league’s most disciplined teams. That hasn’t been the case this season. New England has 26 penalties, more than double the 11 it had to this point last year.

Matt Judon continues to be the Patriots’ most impactful offseason acquisition. He led the pass rush on Brady, pressuring him on multiple occasions and sacking him once.

It forced Brady to rush throws, something he rarely does.

“I think every day that we come back in this building, we only get better and closer as a team,” said Judon, who leads the team with 4 1/2 sacks and six tackles for loss. “I don’t think we are far off, I think we are right there and time will tell.”

While part of the blame certainly belongs to the offensive line, the run game had its worst showing of the young season.

The Patriots rushed the ball eight times for minus-1 yard. It was a step backward for an offense that entered the game ranked in the bottom third of the league, averaging 91.7 rushing yards per game.

Defensive end Henry Anderson left the game in the second quarter with a chest injury and did not return. Special teamer Cody Davis left in the third quarter with a knee injury. … Jonathan Jones suffered an undisclosed injury.

102-2 — The Patriots' record at Gillette Stadium in the regular season when leading at halftime. Sunday night was their second loss in that situation.

Now 0-3 at home for the first time under coach Bill Belichick, New England heads back on the road to visit the Texans, losers of three straight.