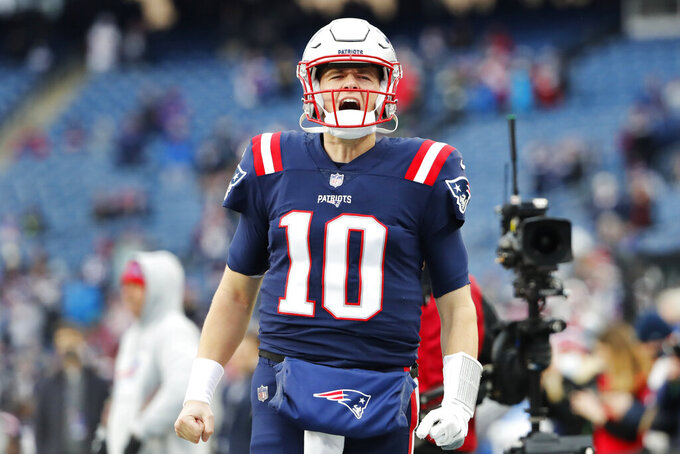 New England Patriots quarterback Mac Jones yells while running onto the field prior to an NFL football game against the Buffalo Bills, Sunday, Dec. 26, 2021, in Foxborough, Mass. (AP Photo/Winslow Townson)

BETTING LINE: Patriots by 15 1/2, according to FanDuel Sportsbook.

TURNOVER DIFFERENTIAL: Jaguars minus-19; Patriots plus-7.

JAGUARS PLAYER TO WATCH: Rookie Trevor Lawrence, the No. 1 pick in the NFL draft, has just one touchdown pass in his last eight games. It’s a stunning stretch of futility that has some questioning Lawrence’s long-term viability as a franchise QB. He’s completed just two passes longer than 30 yards in that eight-game stretch — he’s been plagued by drops and poor offensive line play – while throwing five interceptions, losing two fumbles and taking 18 sacks.

PATRIOTS PLAYER TO WATCH: RB Damien Harris. He is fourth in the NFL with 12 rushing touchdowns. With his next he’ll become the fifth New England player to reach 13 rushing TDs in a single season. He also has five 100-yard games in 2021. Since 1970, only Hall of Famer Curtis Martin (nine in 1995) and Corey Dillon (nine in 2004) have had more in a season for the Patriots.

KEY MATCHUP: Lawrence vs. New England’s secondary. Lawrence's rough rookie season could find a new pit as he prepares to face a defense allowing only 193.7 yards per game through the air. The unit is also looking to bounce back after being beaten up by Buffalo’s Josh Allen last week. His 314 passing yards marked just the second time this season New England has surrendered more than 300 yards.

KEY INJURIES: The Jaguars placed RB James Robinson (Achilles tendon) and P Logan Cooke (knee) on IR, ending their seasons. G Will Richardson (finger) and TE James O’Shaughnessy (hip) missed practice Wednesday but are expected to try to play. The Jaguars have had 25 players on the COVID-19 list, including 10 starters, but many of them are expected to return in time for Sunday. Some might even have to fly separately to New England in hopes of getting cleared on game day. … Veteran Patriots backup quarterback Brian Hoyer was added to the COVID-19 list this week, along with linebackers Matt Judon, Ja’Whaun Bentley, Josh Uche and Brandon King. Hoyer has been rookie Mac Jones’ backup for each of the first 15 games. If Hoyer is unavailable, 2019 fourth-round pick Jarrett Stidham could move into that role. While New England has some depth at linebacker, Judon has been its best pass rusher and leads the team with 12 1/2 sacks.

STATS AND STUFF: The Jaguars have lost 16 consecutive road games, the longest skid in the league. … They have scored nine touchdowns in their last nine games, with three of those coming in the fourth quarter while trailing by double digits. … Drops have been a huge concern all season; the Jags lead the league with 33. … Lawrence leads all rookies with 319 completions and ranks second with 3,225 yards passing. He needs 47 more yards passing for the most in franchise history for a rookie. … Laquon Treadwell looks for his sixth consecutive game with at least 50 yards receiving. … CB Tyson Campbell ranks third among rookies with nine pass breakups and ranks second among rookie DBs with 61 tackles. ... New England's Bill Belichick can post his 20th 10-win season as a head coach, which would tie Don Shula for the most in NFL history. … The Patriots are 24-6 against rookie quarterbacks under Belichick. It includes a 25-6 win in Week 2 over the New York Jets in which 2021 No. 2 overall pick Zach Wilson threw four interceptions. Texans rookie Davis Mills threw for 312 yards and three TDs, but came up short in a 25-22 loss in Week 5. … Jones leads all rookie quarterbacks with 3,313 passing yards and 18 touchdowns. He needs two passing TDs to become the 15th rookie QB to reach 3,000 yards passing and 20 touchdowns. … Jones has completed over 70% of his passes in eight games. He can tie Dak Prescott’s rookie record of nine set in 2016. … TE Hunter Henry is tied with Baltimore’s Mark Andrews and Buffalo’s Dawson Knox for first in the NFL among tight ends with nine touchdown receptions. With a 10th he’d join Rob Gronkowski as the only other Patriots tight end to reach double-digit touchdown catches in a season. … WR Kendrick Bourne has 47 catches and needs three receptions to establish a single-season career high. … Matt Slater needs one special teams tackle to reach double-digits for the 10th time in his career.

FANTASY TIP: Patriots cornerback J.C. Jackson enters the week second in the NFL with seven interceptions behind only Dallas’ Trevon Diggs with 11. Lawrence has gone more than two games without throwing a pick only once this season.