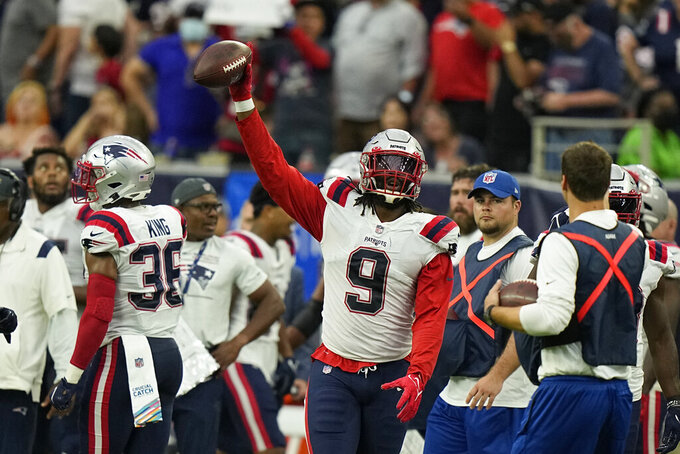 New England Patriots linebacker Matt Judon (9) celebrates after recovering a fumble on the last play of the game against the Houston Texans in an NFL football game Sunday, Oct. 10, 2021, in Houston. The Patriots won 25-22. (AP Photo/Eric Christian Smith)

FOXBOROUGH, Mass. (AP) — The Patriots needed a late-game rally to avert a loss at Houston on Sunday.

They are hoping to keep the momentum going — and get much better luck on the injury front — as they return home to prepare for a visit from one of the league’s hottest teams.

After four games in which the Patriots struggled to score touchdowns in the red zone, rookie Mac Jones was spot-on when his team needed him in the fourth quarter against the Texans in New England's 25-22 win.

He led a seven-play, 54-yard drive that ended with a 13-yard touchdown strike to Hunter Henry to tie the game at 22. Then he led a 15-play, 84-yard drive capped by Nick Folk’s fourth field goal of the day to put the Patriots in front for good.

“We just out-competed,” Jones said. “I don’t know if we outplayed the other team, but we definitely out-competed and that’s all we can ask ourselves to do.”

Jones finished 23 of 30 for 231 yards a touchdown and an interception. He now has 135 completions on the season. That ties him with Cincinnati’s Joe Burrow for the most by a rookie in his first five starts in NFL history.

The Patriots also moved the ball much better on the ground, rushing for a season-high 126 yards after getting minus-1 yard in last week’s loss to Tampa Bay. And they did it all with four starters on their offensive line out.

Left tackle Isaiah Wynn and left guard Mike Onwenu were on the reserve/COVID-19 list. Right tackle Trent Brown was placed on injured reserve Saturday with a right calf injury and right guard Shaq Mason was ruled out with an abdominal injury. It left center David Andrews as the only healthy regular starter.

“I’m not saying it was perfect, but I thought they battled," he said. "For the most part, Mac had some time to throw, and we made some yards in the running game to stay balanced.”

Belichick said he likes the progress the offense made overall as well.

“I think any time you do things well, it builds your confidence, whether it’s in practice or, more importantly, in game situations,” he said.

They’ll need it this week when they host the Dallas Cowboys, who have the league’s top-rated offense, averaging a league-high 439.6 yards per game. Dallas’ 34 points per game ranks second only to Buffalo’s 34.4.

Linebacker Matt Judon said how the Patriots finished the game will give them some needed energy going into this week.

“It felt good to get that win, especially when you feel like you have been playing some good ball, and just some things weren’t going your way,” Judon said.

Despite the injuries, the reserves on the offensive line stepped up. Along with Andrews, the Patriots started Justin Herron at left tackle, James Ferentz at left guard, Ted Karras at right guard and Yodny Cajuste at right tackle.

Jones was sacked once and hit only four times for the game, giving him time to operate in the pocket.

Despite the two late-game drives, the Patriots offense was still only 2 of 5 in the red zone. New England still ranks last in the league, scoring touchdowns on only 6 of 16 (37.5%) of its red zone opportunities.

Linebacker Jamie Collins began his third stint with the Patriots after being signed earlier in the week. He joins backup quarterback Brian Hoyer as the only Patriots with three stints with the team. He had an 8-yard sack in the fourth quarter that helped force a punt and set up New England’s go-ahead scoring drive.

Running back Damien Harris thought he put a crucial fumble late in the Patriots’ Week 1 loss to Miami behind him. But the issue returned Sunday in the second quarter.

With the Patriots trailing 12-6 and on the Houston 5, Harris had the ball punched out by Terrance Mitchell as he was about to cross the goal line. Though ruled on the field that he’d crossed the line before the fumble, an automatic booth review overturned call.

To make matters worse, Harris left the game in the fourth quarter with a ribs injury and didn’t return. Belichick said Monday morning that he didn’t have an update on his status.

New England will be looking for its first home victory of the season (0-3) Sunday. It has never started a season 0-4 at home under Belichick.