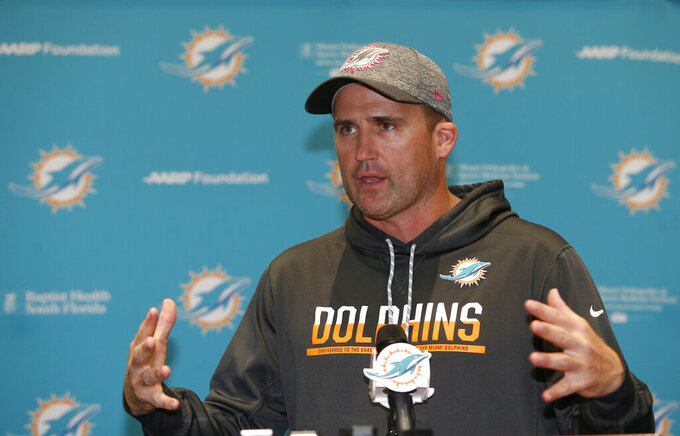 FILE - In this June 5, 2017, file photo, Miami Dolphins associate head coach/special teams coordinator Darren Rizzi gestures as he speaks after an NFL football practice, in Davie, Fla. Rizzi is the fifth candidate to interview for their head coaching job. Rizzi joined the Miami staff in 2009 and has won the endorsement of such current and former Dolphins as Jason Taylor, Brian Hartline, Kiko Alonso and Kenyan Drake. He has been special teams coordinator since 2011 and has also been associate head coach since 2017. (AP Photo/Wilfredo Lee, File)

MIAMI (AP) — The Miami Dolphins are turning to their AFC East nemesis for help.

New England Patriots linebackers coach Brian Flores is a finalist in the Dolphins' coaching search, a person familiar with the decision said Friday, and they're expected to offer him the job when his team's postseason ends.

The person confirmed the decision to The Associated Press on condition of anonymity because the Dolphins weren't commenting publicly about the status of the search.

If they fail to reach a deal with Flores, they haven't ruled out Dallas Cowboys secondary coach Kris Richard.

Flores has been a Patriots assistant for 11 seasons and took over defensive play-calling a year ago after the departure of defensive coordinator Matt Patricia. In Miami he would replace Adam Gase, who was fired after three seasons and hired Wednesday as coach of the New York Jets.

New England plays the Los Angeles Chargers in the AFC playoffs Sunday. The Dolphins have been also-rans to the first-place Patriots in the AFC East 15 of the past 16 years.

Miami has finished with six to eight wins in nine of the past 10 years, and hasn't won a playoff game since 2000. As a result, the 78-year-old Ross said the Dolphins will abandon their win-now approach and build with the long term in mind.

A roster revamp is expected to include the departure of quarterback Ryan Tannehill, who has been with the team since 2012. The next coach, who will report to Grier, will be Miami's 10th since 2004, including three interim coaches.