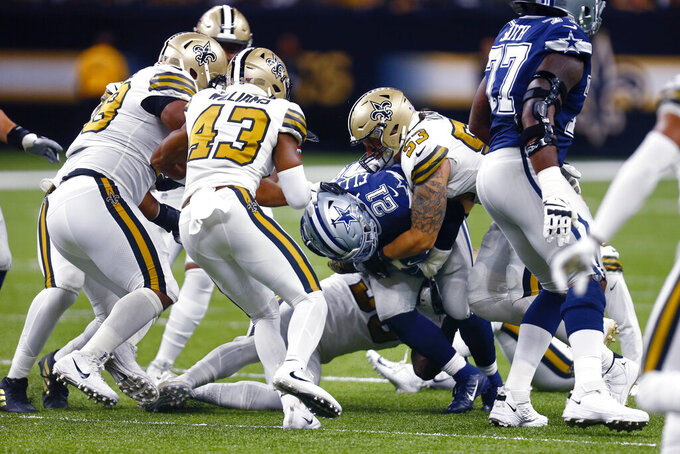 NEW ORLEANS (AP) — The Saints are 2-0 without future Hall of Fame quarterback Drew Brees. That alone made Sunday night's 12-10 victory against Dallas beautiful for coach Sean Payton despite some ugly offensive moments.

"It's just about the feeling of winning," Payton said Monday.

Two weeks after a thumb injury sidelined Brees for an estimated six games, New Orleans (3-1) has moved up rather than down in the standings, leading the NFC South while relying heavily on special teams and defense.

The Saints returned a fumble and a punt for touchdowns at Seattle, setting a Payton-era low for yards in a victory with 265.

Against the Cowboys, they won without scoring a touchdown for the first time since 1998 — eight years before Payton's hiring. Four field goals from Wil Lutz and a dominant defensive performance fueled the win.

New Orleans held the Cowboys' Ezekiel Elliot to 35 yards on 18 attempts, the second-lowest average per carry of his four-year career. Aside from a 32-yard pass to tight end Blake Jarwin on Dallas' lone touchdown drive, quarterback Dak Prescott did not have a completion of more than 16 yards until a desperate final series that ended with an interception as time ran out.

"We hit a home run, and I'm glad to be a part of changing the mindset," safety Von Bell said. "We want to be the reason why we win games, and that's what we did last night."

Bell was a difference-maker for the second consecutive week. After scoring on the fumble return against Seattle, he recovered a fumble from Dallas tight end Jason Witten near midfield to stop a drive in the second quarter. He went one better on the Cowboys' next series, stripping Elliot and falling on the ball.

Bell's 10 tackles gave him a team-high 31 for the season.

"The game is slowing down for me. I'm just seeing the plays and the formations and know what's coming," he said.

"I was pleased with the way we were able to establish the line of scrimmage," Payton said. "We won that battle yesterday. We won the rushing battle and the turnover battle."

The next step is eliminating drive-killing mistakes.

Payton blamed himself for the play call on the final sack — a 16-yard loss on third down that knocked the Saints out of field goal range as they protected their two-point lead right after the 2-minute warning.

The defense held again, but Payton was angry about having put his team in that position.

"It ended up taking us out of scoring position, and that's not good," he said.

In their most complete performance of the year, the defense shut down the run, took away big plays in the Dallas pass offense and limited the Cowboys to 4 of 11 third-down conversions.

The Saints continue to draw a flurry of flags, an unsustainable formula for success. The offensive linemen were called for holding five times. New Orleans is fourth-to-last in the NFL in total penalties (38) and tied for fifth in penalty yards (285).

Receiver Ted Ginn Jr. had one pass bounce off his hands and become an interception, bobbled another one before pulling it in and finished with three catches for 19 yards. Since a seven-catch, 101-yard opener against Houston, he has five receptions for 34 yards.

Defensive end Trey Hendrickson, the team sacks leader with three, left with a neck injury in the second quarter and did not return. Payton did not provide an update on his status Monday.

30 — The Saints have played 30 consecutive games without allowing a running back to gain 100 yards. It last happened on Nov. 19, 2017, when Washington's Samaje Perine picked up 117.

An October schedule that appeared soft a few weeks ago suddenly looks more difficult. Tampa Bay is coming off a 55-point outburst against the Rams. Jacksonville has won two in row behind surging rookie quarterback Gardner Minshew II. Chicago has won three straight behind a dominant defense.