Prescott's playoff road resumes in LA, where so much started 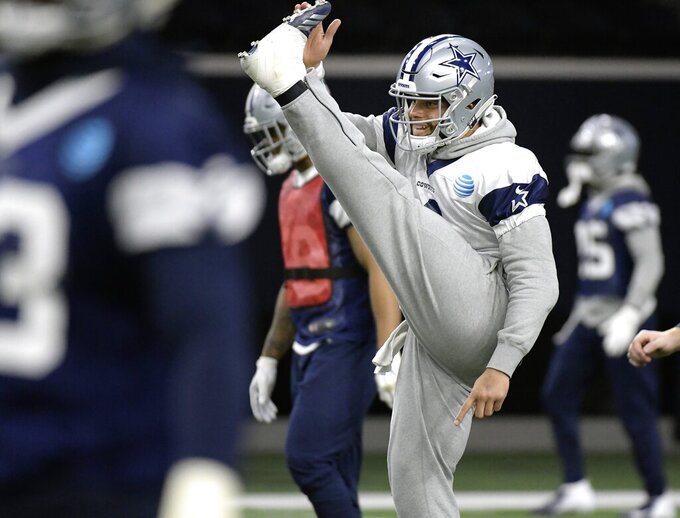 FRISCO, Texas (AP) — So many questions asked of Dak Prescott revolve around two years ago, when the Dallas quarterback led the Cowboys to an NFC-best 13 wins as a rookie before losing his playoff debut.

There's a new angle to that old story line now that the 2016 NFL Offensive Rookie of the Year has his first postseason victory. Prescott and the Cowboys (11-6) are headed to Los Angeles Memorial Coliseum for a divisional matchup with the Rams (13-3) on Saturday night.

That famous venue was the site of Prescott's NFL debut in a preseason game that marked the league's return to LA after a 22-year absence. His dazzling day wasn't a huge deal then because the Cowboys had no reason to believe Tony Romo wouldn't be their quarterback.

Two years later, it's a signature moment in the sudden transformation at quarterback for America's Team, triggered when Romo was injured in another preseason game. And now it could be the setting for Prescott to reach something Romo never could: an NFC championship game.

"I guess I couldn't imagine it being back in the Coliseum against the team I started off my career, but I've always talked about the confidence I've had in myself and this team," Prescott said. "Nothing has changed."

This is Prescott's second shot at a divisional win after Aaron Rodgers and the Green Bay Packers stole the first with some last-second magic. Just as Romo had nine years earlier, Prescott lost at home as the NFC's top seed in his team's postseason opener.

Dallas missed the playoffs last season , in large part because of a six-game suspension for Prescott's fellow first-year star from a year earlier, running back Ezekiel Elliott. A 3-5 start this year with a sputtering quarterback and offense had the Cowboys looking like also-rans again.

They've run off eight wins in nine games since, with a much more efficient Prescott throwing to a new No. 1 receiver. Amari Cooper was acquired in a trade with Oakland, one game before the surge to a second NFC East title in three seasons with Prescott and Elliott.

Armed with a 24-22 wild-card win over Seattle, and a clutch run on a QB draw that helped seal it, Prescott will try to match the star Rams quarterback-running back duo of Jared Goff and Todd Gurley while facing NFL sacks leader Aaron Donald.

"Whatever the situation is," coach Jason Garrett said, "rookie minicamp, first opportunity playing in a previous game against the Rams with all those players you mentioned, or on into the regular season that year or any year, he just handles the success and the adversity of this game really, really well, as well as anybody I've been around."

In some ways, Prescott is as polarizing with fans as Romo was. While his predecessor was criticized for not winning enough big games, Prescott is perceived as a game manager with accuracy issues. The critics were loud when the Cowboys were losing. They aren't completely silent now.

Prescott said he was with a friend when he happened to hear his name in a talk radio conversation recently.

"He wasn't talking very highly," Prescott said. "I just kind of laughed. Obviously the comment I made, he knew to turn it down so I couldn't hear it. They don't necessarily bring it around me. They know it serves no regard to how I do or how I feel about my game."

Prescott says his only measure is wins, and New England's Tom Brady is the only quarterback with more in the regular season (35-32) since the Cowboys drafted the former Mississippi State star in the fourth round in 2016 — 131 picks after taking Elliott fourth overall.

"I'm glad to be his teammate," said Elliott, who has won two rushing titles in three years. "He's a hell of a leader, a hell of a player and I can't wait to go win some more games with this guy."

Prescott showed it in his preseason debut in LA, again in that playoff loss to the Packers by leading two drives to tying scores in the final five minutes and again with a fourth-quarter rally to beat the Seahawks .

One more final-quarter comeback in the postseason, and Prescott will have as many as Roger Staubach, the franchise leader with two. Right now, he has as many as Romo and three-time Super Bowl winner Troy Aikman.

"I don't really try to keep up with the past so I can't just relate directly to what happened in 2016 or just however that went," Prescott said. "I just know how special this team is and how special this season has been. Excited for, as I continue to say, Saturday."

The surroundings will be familiar, the stakes exponentially higher.