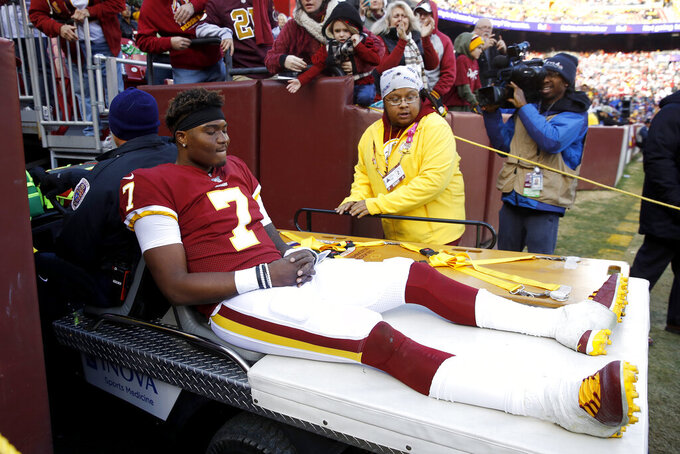 LANDOVER, Md. (AP) — Dwayne Haskins limped off the field in the middle of the best game of his young NFL career.

Owner Dan Snyder and the Washington Redskins medical staff ensured he wouldn't limp back on.

Haskins injured his left ankle on a sack on the first play of the second half after completing 12 of 15 passes for 133 yards and two touchdowns. He watched from the sideline as Case Keenum led a 99-yard tying drive and the Redskins ultimately lost 41-35 in overtime to the New York Giants. Snyder encouraged the rookie quarterback to listen to medical advice and not return.

It's all about the future, not the present, for the Redskins (3-11), who can clinch the second overall draft pick with a loss next week at Dallas. That could put them in position to draft Heisman Trophy finalist Chase Young, a teammate of Haskins at Ohio State.

“There’s no way these teams were thinking about (draft positioning),” interim coach Bill Callahan said. “I don’t think that concept ever enters their mindset."

Haskins' mindset is to try to play through pain, like he did with an ankle injury Dec. 8 at Green Bay. Haskins sported a walking boot after the game, said X-rays were negative and that he was set for an MRI.

It wasn't his call to re-enter the game.

“I evaluated Dwayne following his ankle injury,” Redskins head physician Dr. Robin West said. “After reviewing the X-rays and conducting a full examination, I did not clear him to return to game action.”

The 15th overall pick went throw for throw with No. 6 pick Daniel Jones in the first half. He showed the kind of progress receiver and college teammate Terry McLaurin raved about this week and was on a roll before getting sacked by Markus Golden and going down.

After Haskins was carted off the sideline and down the tunnel for examination, Keenum was 16 of 22 for 158 yards and a touchdown in his first real action since October.

With and without Haskins, the Redskins offense showed off some young weapons to entice a strong coaching candidate. Undrafted free agent receiver Steven Sims caught two TD passes, and third-round steal McLaurin had seven receptions for 86 yards before being injured in the final minute of regulation.

It's unclear if Haskins or Keenum will play next week at Dallas in the season finale.