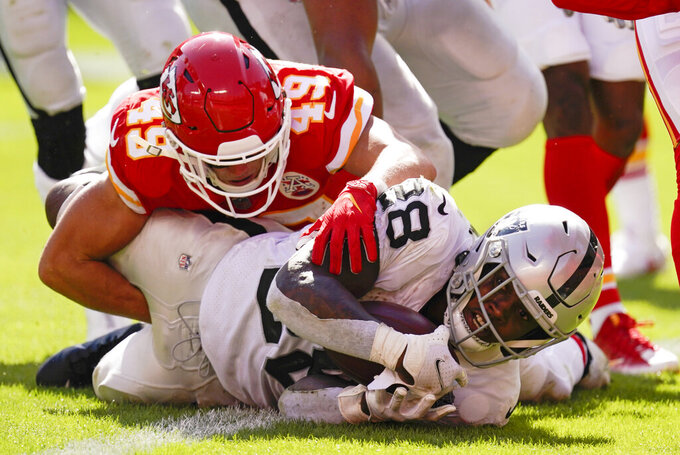 The first-round running back who set the Raiders rookie rushing record in 2019 was held to 17 yards on 10 carries in a loss to Tampa Bay that has him searching for answers about how to get back on track this season.

“I was embarrassed. It was very embarrassing for me,” Jacobs said Wednesday. “I went and looked at film. I went and watched practice. I watched previous games. I was trying to see where I could improve my game, what I could bring to this team to try to get the guys motivated to be where we want to be.”

The performance against a Buccaneers team that allows a league-low 3.0 yards per carry is explainable. The Raiders were without their entire starting offensive line all week after right tackle Trent Brown tested positive for the coronavirus and the other four starters were sent home because they had “high risk” contacts with Brown.

They returned to the team just hours before the game but struggled to get into a rhythm after a lack of practice.

“We had a lot of guys that didn’t practice the whole week. You could tell them like we weren’t all on the same page at the same time,” Jacobs said. “It was kind of slow getting to certain reads and certain things.”

But the problems running the ball go deeper than just that one game. Jacobs has topped 4.0 yards per carry just once this season as the line has struggled to open up holes with Brown and left guard Richie Incognito missing most of the season, and Jacobs has been unable to break tackles as easily as he did as a rookie.

After ranking near the top of the league in broken tackles last year and leading the league with 14 the first two weeks, according to SportRadar, Jacobs has broken just one in the past four games.

The drop in performance comes after a hip injury that had him on the injury report last month, but Jacobs and coach Jon Gruden say he is healthy now and the hip wasn’t a factor.

But they both believe the running game is close to a breakthrough.

“The one thing we’re lacking right now is one long run,” Gruden said. “We need a breakout run, we need a big run. We hadn’t had that yet, but we’re making positive yards, we’re moving the ball, we’re doing a lot of good things. I think we’re better offensively than we were last year, but we’d like to get Trent Brown and Incognito back to help us out.”

Jacobs’ 116 runs without a gain of at least 20 yards are by far the most in the league season, 30 more than the next highest, 37-year-old Frank Gore.

Jacobs had eight runs last year that went at least 20 yards, providing a big-play spark to the offense.

“It’s been just the little things on trying to break a big run,” he said. “We’ve been close on a lot of plays. I’m my hardest critic on myself honestly. I come out every day in practice and nit pick the things I can get better in, especially in a game. Trying to be more patient, trying to hit things, trying not to think so much and go out there and run. That’s been a thing I feel like I’ve been working on.”