Rams determined to rebound from thrashing on short week 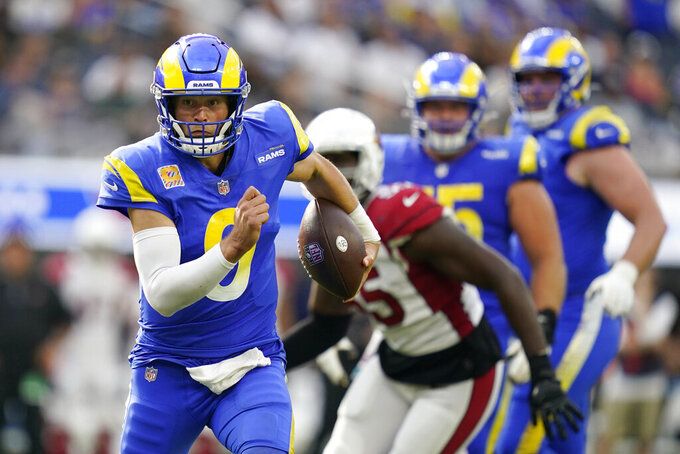 Los Angeles Rams quarterback Matthew Stafford rolls out during the second half in an NFL football game against the Arizona Cardinals Sunday, Oct. 3, 2021, in Inglewood, Calif. (AP Photo/Ashley Landis)

LOS ANGELES (AP) — The Los Angeles Rams' three-game stint as the best-looking team in the league came to an abrupt halt in their blowout loss to Arizona.

Coach Sean McVay still believes the 37-20 thrashing couldn't have happened at a much better time for the Rams (3-1), who probably won't get a minute to dwell on it while they prepare to visit Seattle on Thursday night.

“We won’t allow one game to define us,” McVay said Monday. “It was not the outing we wanted from anybody, but fortunately we’ve got a short week to dust ourselves off and get back ready to roll.”

The Rams' mistakes against the unbeaten Cardinals were large and fundamental — and largely absent from Los Angeles' first three games.

But every problem stemmed from the fact Murray and the Cards rolled through the Rams' defense, which was the best in the NFL last season. After two straight rough outings against the offenses run by elite quarterbacks with Tampa Bay and Arizona, the Los Angeles defense gets no respite with Russell Wilson across the line this week.

The Rams suspected they would take a step back this season defensively after losing coordinator Brandon Staley and four starters, but they still feel their offense took a big step forward despite a mediocre outing against Arizona. McVay and his players remain confident they can do enough offensively to keep their defense in any game.

“You turn the ball over twice in the first half, and then the other drives didn’t really go for touchdowns,” left tackle Andrew Whitworth said. “We had to settle for field goals, and we weren’t able to punch it in. Yesterday, seven points was what you were going to have to get when you had the football.”

The running game was outstanding when McVay deigned to use it. Darrell Henderson rushed for 89 yards on just 14 carries as his offensive line opened up significant gaps, and LA finished with 123 yards on the ground despite just 23 attempts by McVay.

The last two games have evoked memories of the 2019 defense that prompted McVay to upend his coaching staff. Los Angeles has yielded 911 combined yards to Tampa Bay and Arizona, and not even an impressive season from Jalen Ramsey has covered up for this group's weaknesses in pass coverage and on the defensive line. Midseason personnel moves are tough, but that's never stopped Rams general manager Les Snead, who might do well to look for a veteran defensive back.

WR Van Jefferson continues to improve in his second NFL season. He caught all six balls thrown to him by Stafford for 90 yards and an early touchdown against Arizona. He has been targeted 18 times this season, as many as tight end Tyler Higbee and only seven fewer than Robert Woods.

CB David Long Jr. was clearly targeted by Murray and Cardinals coach Kliff Kingsbury, particularly early on. Long allowed five catches for 89 yards and a touchdown, including a 41-yard TD grab by A.J. Green on which Long committed a penalty and still couldn't stop it. It's unclear whether Long is a viable long-term replacement for Troy Hill as LA's nickel back.

Henderson had the second-biggest game of his NFL career after missing last week with a rib injury. Short weeks are particularly hard on running backs, so Sony Michel could get more action in Seattle.

0-3: The Rams' record in their all-blue uniform combination after losing to Arizona. Los Angeles hasn't won while wearing royal-blue jerseys and uniform pants since its comprehensive uniform redesign in 2020.

A win over the Seahawks would put the Rams right back on track in the NFC West and the overall race to be a Super Bowl contender, but it's a tall order on a short week.