Rams to face Chiefs for first time since 2018 thriller 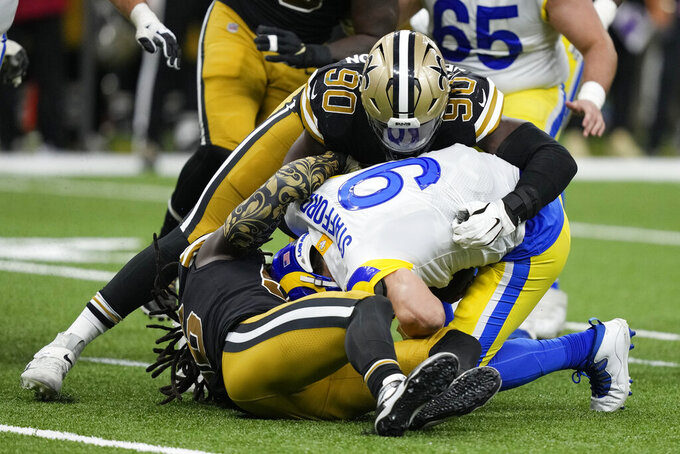 TURNOVER DIFFERENTIAL: Rams minus-7; Chiefs minus-3

RAMS PLAYER TO WATCH: QB Bryce Perkins. Matthew Stafford was in the concussion protocol after taking a hit last week against New Orleans, and it's likely that Perkins will get the start in Kansas City. John Wolford started a week earlier when Stafford was out against Arizona, but has a neck injury.

CHIEFS PLAYER TO WATCH: TE Travis Kelce had six catches for 115 yards and three TDs last week against the Chargers, including the go-ahead score in the final minute. His value has always been high, but with injuries to wide receivers Mecole Hardman, JuJu Smith-Schuster and Kadarius Toney, he is the most reliable pass catcher in the Kansas City offense.

KEY MATCHUP: Chiefs RB Isiah Pacheco against the Rams run defense, which ranks fourth in the league and has been one of their rare bright spots this season. Pacheco ran for 107 yards last week against the Chargers, giving the air-it-out Chiefs offense some semblance of balance for the first time this season.

KEY INJURIES: Stafford is in the concussion protocol for the Rams. ... OG Joe Thuney (ankle) and WR Kadarius Toney (hamstring) missed practice for the Chiefs, though Smith-Schuster (concussion) is expected to return.

SERIES NOTES: Kansas City has won five of the past six games in the series, but the lone loss was one of the memorable regular-season games in NFL history. Jared Goff threw the go-ahead 40-yard touchdown pass to Gerald Everett with 1:49 left to give the Rams a 54-51 victory. Goff finished with 413 yards and four touchdowns passing while Chiefs counterpart Patrick Mahomes threw for 478 yards with six TD passes and three interceptions.

STATS AND STUFF: The Rams have lost four straight games for the first time under Sean McVay. ... Rams WR Tutu Atwell scored his first NFL touchdown on a 62-yard pass from Stafford last week against New Orleans. ... Rams WR Allen Robinson II has at least one catch in all 110 games of his career. He had four for 47 yards and a score against the Saints. ... The Rams ran for a season-high 148 yards against New Orleans. ... Rams LB Leonard Floyd and DT Greg Gaines had two sacks apiece against the Saints. ... The Chiefs have had at least 400 yards in four straight games. The franchise record is five set in 2004 and matched in 2020. ... Kelce has 33 games with at least 100 yards receiving, a record for tight ends. His streak of 136 consecutive games with a catch trails only Arizona's DeAndre Hopkins (140). ... Mahomes and Kelce have connected for 45 touchdown passes, trailing only Tom Brady-Gronkowski and Drew Brees-Jimmy Graham for most for a quarterback and tight end. ... Mahomes has thrown at least one TD pass in 15 straight games. ... Chiefs DE Mike Danna and DT Chris Jones had two sacks apiece last week against the Chargers.

FANTASY TIP: The Rams are second to last in the league against the pass, and that bodes well not only for Mahomes but whomever he has available. Hardman, Smith-Schuster and Toney could all miss the game, so grabbing WR Marquez Valdes-Scantling or up-and-down rookie Skyy Moore could be a wise move this week.