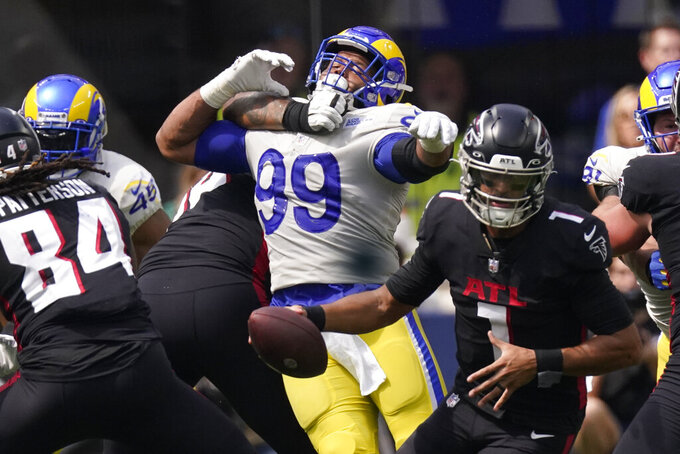 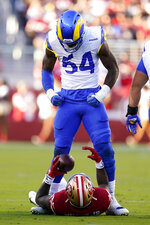 THOUSAND OAKS, Calif. (AP) — With defensive tackle Aaron Donald in the fold, rushing the passer had never been a problem for the Los Angeles Rams.

“Our pass rush, just in general, has to pick up,” defensive coordinator Raheem Morris said Thursday. “That was a big topic for us this week, something that we have to get going, particularly our four-man rush. All those things is what make us great.”

The Rams (2-2) have seven sacks through four games, which is tied for 22nd in the NFL. They have sacked the quarterback on 4.93% of pass attempts, which ranks 25th.

Los Angeles finished fifth by the same metric last season, bringing down the passer on 8% of dropbacks. Through four games en route to winning the Super Bowl, the defense had amassed 12 sacks. The Rams finished with 50, third-most behind Pittsburgh and Minnesota.

The defense has failed to record a sack twice, something it never did during the 17-game regular season in 2021, when the Rams had at least two sacks in all but two games.

Morris said the absence of sacks is one indication the Rams need more from the defensive front.

“They cause disruption, they tip balls, they make the things happen that make defense easy, and we need more opportunities like that. We more of those things like that in order to make the game easier for us to play on defense. Right now we’re playing decent, but you can play so much better, and we all know what it looks like,” Morris said.

In the 24-9 loss at San Francisco on Monday night, the Rams failed to sack Jimmy Garoppolo on 28 called passes. Donald had the lone hit on the quarterback, and the defensive line and outside linebackers did not account for any of the three passes defended.

While the 49ers used screens and other pass plays that developed quickly to limit the rush, Morris said that approach is not an excuse for the Rams’ ineffectiveness.

In an effort to manufacture more pressure, Morris used some different alignments, including Donald standing up as an edge defender. That look allowed defensive tackle Greg Gaines to collapse the pocket. Morris won’t rule out moving Donald more often as the three-time defensive player of the year can dictate how the opposing offensive line protects.

“I think we have to use more of those things to do it, but you’d never not go as far as you need to go in order to get pass rush. Affecting the quarterback for us is top priority,” Morris said.

For Donald, who is tied with inside linebacker Bobby Wagner for the team lead with two sacks, it isn’t a failure of scheme as much as individual players failing to capitalize on their opportunities.

Donald pointed to a rare instance where he faced a single blocker in the first quarter but could not bring down Garoppolo for a sack.

NOTES: Third-string C Jeremiah Kolone is likely to make his first career start against Dallas on Sunday after Brian Allen (knee) did not practice. Matt Skura could be called up from the practice squad to back up Kolone. ... G David Edwards (concussion) returned to practice.