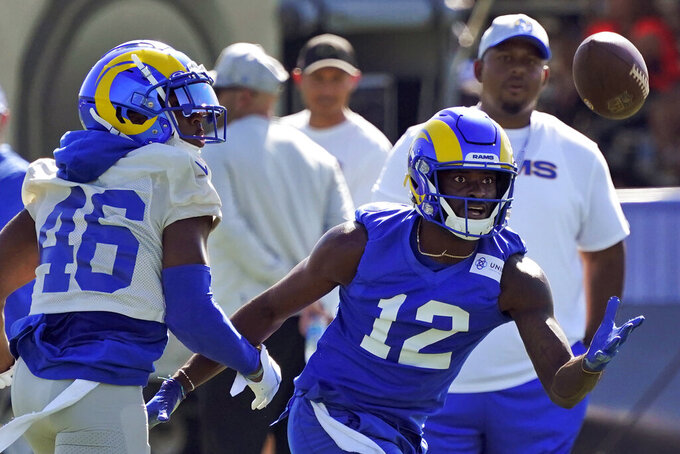 John Johnson, the reliable safety who relayed calls to the rest of the defense, and Troy Hill, who found ways to keep making plays alongside perennial All-Pro Jalen Ramsey and emerging star Darious Williams, each signed with the Cleveland Browns.

Through two days of training camp, the Rams are seeing signs that the best defense in the NFL last season will be able to pick up where it left off, even without those two key players.

“You don’t minimize the importance of John Johnson and Troy Hill and what they meant to us,” coach Sean McVay said Thursday. “That being said, there’s a lot of confidence in the guys that we have in-house, whether it’s guys that we invested in the draft, some other younger players that have just kind of started to ascend. But feel really good about the depth of that secondary.”

Much of that optimism centers around second-year safety Jordan Fuller. Despite being drafted in the sixth round, Fuller quickly emerged as a valuable contributor who had 60 tackles and three interceptions in 12 games.

“Jordan especially, he did some things during OTAs that was pretty insane, pretty freaky to see, so I think he’s gonna be a real good football player for us,” Kupp said.

But the importance of the role Fuller is expected to play this season might be best represented by the green sticker on the back of his helmet. It indicates which player has the radio to hear signals and instructions from coaches, and Fuller is getting the first look at replacing Johnson in that role.

Each of the last two defenders to call plays on the field for the Rams have been safeties, Johnson and Eric Weddle. McVay said it makes sense to have someone in that role who will not be substituted out in different personnel packages, and Fuller is developing into that kind of player.

“You do know that Jordan is more than likely, if he continues to just get better and do what he has done since he has gotten here, he’s probably going to be a guy that’s going to be on the field all three downs,” McVay said.

Johnson and Weddle also had the respect and trust of teammates and coaches, adding to their credentials in handling that responsibility.

“One of the things that struck me is what a great instinctual feel Jordan Fuller has, even though he is a second-year player. There’s a couple plays where he could easily be driving as a post safety, making a lot of plays, but he knows how to smartly say, ‘Hey, I’m right there.’ But he’s pulling up, not making a contact play on some of his teammates,” McVay said.

“Those are the kind of things we’re looking for, but the real evaluations, the best evaluations I should say do come in those pads, but you can get a lot out of this as well.”

There are other young players making an impression on McVay. He praised the development of safeties Taylor Rapp and Terrell Burgess and cornerback David Long Jr. and expects all three to take advantage of the vacancies left by Johnson and Hill.

“We’ve got guys who are capable of filling in those roles,” Ramsey said. “We’ll have new starters and new role players this year, and we’re gonna figure it out. I think we have the right group of guys to do the job.”