Rams think they have talent, tenacity for Super Bowl repeat 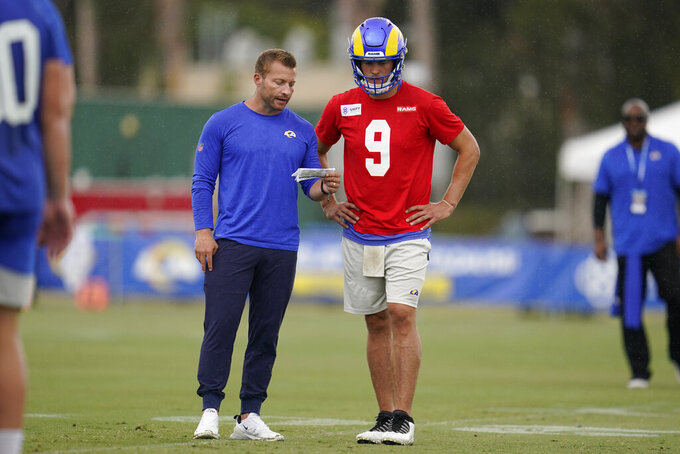 LOS ANGELES (AP) — Sean McVay became the youngest head coach in modern NFL history in part because he's an excellent communicator and teacher who always seems to know what to say.

McVay is now the youngest coach in NFL history to win a Super Bowl, and he's already presenting the challenges of the upcoming season to his Rams in clear, concise terms.

“Let’s turn the page,” McVay said when asked to articulate his message to the defending champions. “Let’s not minimize what a great year last year was, but that’s not going to have anything to do with this year.”

It's a familiar mindset for champions trying to repeat the greatest achievement of their professional lives. But McVay excels at the deceptively simple art of getting his players in the right frame of mind to perform, and he thinks the Rams will have no hangover from last February and a clear vision toward next February.

“We’re still hungry, even if we just won,” edge rusher Justin Hollins said. “Everybody wants another one. It’s football heaven. We want to stay in football heaven, you know what I mean?”

After five winning seasons, four playoff berths, three NFC West titles, two Super Bowl trips and one championship, the Rams know they can trust McVay. His team won nine of 10 down the stretch last season, all the way to that thrilling finale in its home stadium.

The challenge looming this season feels even bigger, but the Rams also seem quite capable of handling it.

“We realize that now we’re the ones with the targets on our back,” center Brian Allen said. "We’re not chasing the Tampa Bays, the teams that won the year before. We know we’re going to have a tough schedule this year, and we’re going to get everyone’s best shot. Bring it on.”

So the mindset is in place to become the NFL's first repeat champions in 18 years, and the talent appears to be sufficient as well. The cornerstones of the title team are nearly all in place, from Matthew Stafford and Cooper Kupp to Aaron Donald and Jalen Ramsey.

What remains is execution, health and luck. The Rams excelled in all of those areas last season, and they're hoping this year is just as generous.

“Just because we did something last year doesn’t mean anything’s going to happen this year,” Stafford said. “We've got to go out there and earn it. Those opportunities that we got to play in those games last year were earned. You ask yourself, what kind of opportunities are you willing to earn? It comes with sacrifice and hard work and being a great teammate.”

The Rams acquired quality over quantity in free agency by adding receiver Allen Robinson and inside linebacker Bobby Wagner.

Returning home to Southern California after a decade in Seattle, Wagner will be the Rams' defensive signal-caller and a major contributor at a position traditionally discounted in Los Angeles' roster-building strategy.

Robinson appears to be poised for a prolific year after eight seasons with Jacksonville and Chicago. The physical pass-catcher has never played with a quarterback of Stafford's caliber, and the Rams need Robinson to produce after they traded Robert Woods.

Kupp will be hard-pressed to duplicate last season's feats: He won the NFL’s triple crown of receiving, earned the AP's offensive player of the year award and received All-Pro honors before claiming the Super Bowl MVP trophy with the eventual winning TD catch.

But the ever-industrious Kupp claims he can be even better, citing his run blocking and certain nuances of route-running.

“I think there’s a lot of parts of the game that my game was lacking,” Kupp said.

The Rams must replace seven starters from their Super Bowl team. Miller's absence will be felt, but the Rams already were a strong pass-rushing team with Donald, Leonard Floyd and Hollins applying pressure before Miller arrived.

At some point in the season, Odell Beckham Jr.'s injured knee likely will be healed enough for the veteran receiver to decide his next step. The Rams are publicly campaigning for Beckham to return to the team with which he caught a TD pass in the Super Bowl, but if Beckham looks ready to contribute down the stretch, there will be competitors for his services.

The fact that Beckham hasn't already re-signed with LA during his rehab seems to be a discouraging sign for a reunion, yet Beckham clearly still feels close to the Rams, who overwrote a portion of his dramatic past. Beckham could be a huge midseason addition for the second straight year, or he could follow Miller's path out the door with a ring and a half-season of memories for slightly more money.

Even though 10 of their 17 games are at SoFi Stadium, the Rams' slate is considered the toughest in the league by some metrics, starting from that difficult opening-night showdown with Miller's Bills. Both chances to break their embarrassing regular-season losing streak to the rival 49ers occur in October, while long trips to Tampa Bay, New Orleans and Kansas City all loom in November — followed by a chilly date in Green Bay on Dec. 19. Los Angeles hosts Denver on Christmas and plays a “road” game against the Chargers on New Year's Day.