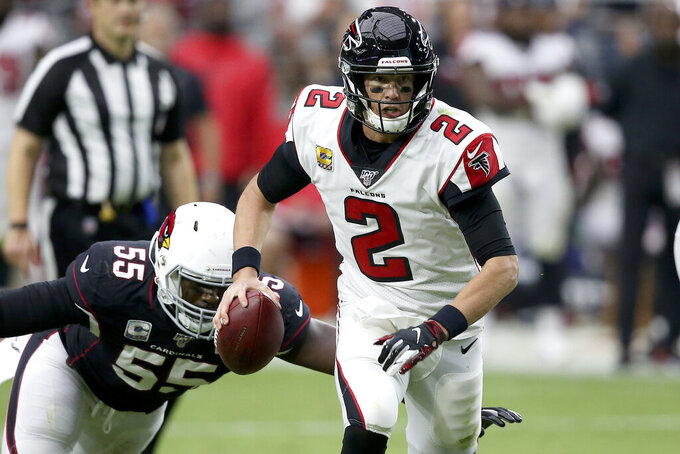 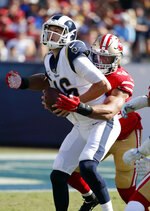 ATLANTA (AP) — There is no guarantee that a Super Bowl appearance will generate long-term momentum.

Just ask the Los Angeles Rams, who return to Atlanta as a .500 team with three straight losses only eight months after their Super Bowl appearance.

Or check in with the Atlanta Falcons, whose 2016 Super Bowl season seems a distant memory. The Falcons have lost four straight, leaving them on target for a second straight losing record.

The Rams (3-3), who play the Falcons (1-5) on Sunday, had a busy week while retooling their secondary. The big addition was cornerback Jalen Ramsey, one of the league's top players at his position, who was acquired from Jacksonville.

The Rams gave up three draft picks, including two first-rounders, for Ramsey in a dramatic attempt to generate renewed momentum for another playoff run following their Super Bowl loss to New England.

Coach Sean McVay said Ramsey provides "all the traits that you look for in a corner."

While Ramsey prepares to play, the Rams may have to rely on a bunch of relatively untested defensive backs against Matt Ryan and Julio Jones, including cornerbacks Troy Hill and Darious Williams and safety Marqui Christian.

The Falcons' frustrations may have peaked when usually reliable Matt Bryant missed a potential game-tying extra point in last week's 34-33 loss at Arizona. Only a dramatic turnaround would save the Falcons from their second straight losing season. The losing streak has increased the pressure on fifth-year coach Dan Quinn.

Quinn said his players "want to get it right."

"They're hurting, the fans are hurting, everybody is," he said. "If you're around the team, you know how much they care and how much it means to them. More than anything, they want to get it right. When we haven't done that, it stings."

Here are some more things to know about the Rams-Falcons matchup:

THEN THERE WAS ONE

Safety Eric Weddle is the only starter from last week's loss to San Francisco who will return in the Rams secondary. He has to lead the new mix of starters.

"That's why you have me, quite honestly," Weddle said. "I've been through this many a time. Revolving door, whether it's safeties, corners, it's my job to get everyone on the same page and play at a high level."

Quinn fired all his coordinators after last season and named himself defensive coordinator. That hasn't produced the results he wanted. The Falcons rank last in the league in scoring defense and sacks. "There's nothing where we can say we're hitting the mark in any way," Quinn said.

The Rams will remain in Atlanta and will practice at Georgia Tech next week before flying to London for their Oct. 27 game against Cincinnati. Quarterback Jared Goff said he thinks the time away from home will be "somewhat galvanizing."

"When you're off on the road, and all you do have is each other, you have that us against the world type of deal," Goff said. "It does tend to bring a team together and you hope you go out and get this win this weekend and build from there."

RYAN ON A ROLL

Ryan, who leads the NFL with 15 touchdown passes, can become the first player in NFL history to pass for at least 300 yards in each of the first seven games of a season. Ryan also has cut down on mistakes. After throwing six interceptions in the first three games, he has only one in the last three.

David Edwards, a rookie fifth-round pick from Wisconsin, is expected to be the Rams' starting left guard after Joe Noteboom was lost for the season with a knee injury. Edwards has yet to take an offensive snap. He has played sparingly on special teams.

The Rams must trust Edwards because backup guard Jamil Demby apparently has not impressed the coaches. The line was the offense's strength last year, but it has been a liability this fall with Edwards the third new starter. The line has had less-than-dominant play by tackles Andrew Whitworth and Rob Havenstein.