Rodgers remains as vital as ever to Packers' aspirations 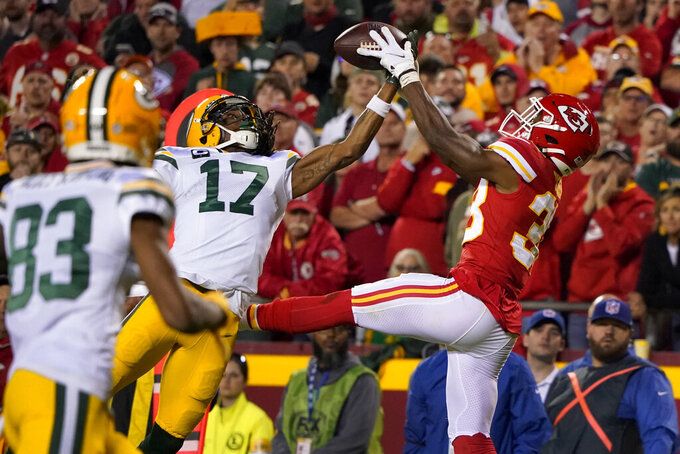 Much of the attention on the Green Bay Packers this year has focused on quarterback Aaron Rodgers’ off-field actions, from skipping the team’s mandatory minicamp to testing positive for COVID-19 amid revelations that he was unvaccinated.

But the results on the field have underscored how vital the reigning MVP remains to the Packers’ fortunes.

With Jordan Love making his first career start Sunday while Rodgers was on the reserve/COVID-19 list, the Packers’ seven-game winning streak ended with a 13-7 loss at Kansas City. They didn’t score until less than five minutes remained.

Green Bay’s only other defeat came when Rodgers threw for just 133 yards with two interceptions and no touchdown passes in a 38-3 season-opening loss to New Orleans. In the Packers’ seven wins, Rodgers has thrown a combined 17 touchdown passes with only one interception.

Rodgers’ performance during that seven-game win streak has helped the Packers (7-2) grab a commanding 3 ½-game lead in the NFC North even after losing Sunday.

“There’s a lot to like about this team in terms of just the adversity we’ve faced,” Packers coach Matt LaFleur said Monday. “We’ve had a lot of different guys in and out of the lineup. We’ve had a lot of guys get some great experience out there, and I think that’s going to pay dividends down the stretch.”

The earliest Rodgers could return is Saturday. LaFleur says Rodgers would start Sunday if available even after not practicing all week.

Green Bay ranks fifth in the league in total defense and sixth in scoring defense despite playing much of the season without injured outside linebacker Za’Darius Smith and cornerback Jaire Alexander, who both earned Pro Bowl honors last season.

The defense keeps plugging holes and stopping whatever offense it faces. … The offense isn’t producing quite as well as it did last year while leading the NFL in scoring, but it remains solid as long as Rodgers is available.

Special teams have been an issue for years. The problems were particularly glaring against Kansas City. The Packers missed two field goals. Kansas City made a field goal after a punt went off the foot of Malik Taylor, giving the Chiefs the ball at Green Bay’s 10-yard line.

LB De’Vondre Campbell signed with the Packers in the offseason and has played like a Pro Bowl performer. He was selected the NFC’s defensive player of the month for October. … DT Kenny Clark, OLBs Rashan Gary and Preston Smith and DE Dean Lowry have shown marked improvement. … CB Eric Stokes is having a solid rookie season. … RB A.J. Dillon has formed a quality tandem with 2020 Pro Bowl pick Aaron Jones after carrying the ball just 46 times last year.

K Mason Crosby had a franchise-record streak of 27 consecutive successful field-goal attempts snapped last month at Cincinnati. Since making his first three field-goal tries in that Bengals game, Crosby has made just four of his last 10 attempts. The transition to a new holder, with Corey Bojorquez taking over for JK Scott, has played a role. The laces have been pointing in the wrong direction on some of Crosby’s recent misses. Green Bay also switched long snappers last week, with Steven Wirtel replacing Hunter Bradley.

OT David Bakhtiari, an All-Pro left tackle last season, still hasn’t made his 2021 debut as he recovers from a torn left anterior cruciate ligament. … Za’Darius Smith (back), Alexander (shoulder) and C Josh Myers (knee) are on injured reserve but hope to return later this season. … TE Robert Tonyan (knee) is out for the season. … Stokes didn’t play Sunday due to a knee injury and a back problem knocked Clark out of the game. LaFleur said Monday he’s hopeful both injuries aren’t long-term situations.

1963 – That was the last time the Packers lost their season opener and then won at least seven straight games. That 1963 squad followed a season-opening loss with eight consecutive victories before finishing 11-2-1.

The Packers are at home for five of their last eight games, starting Sunday when they host the Seattle Seahawks (3-5).