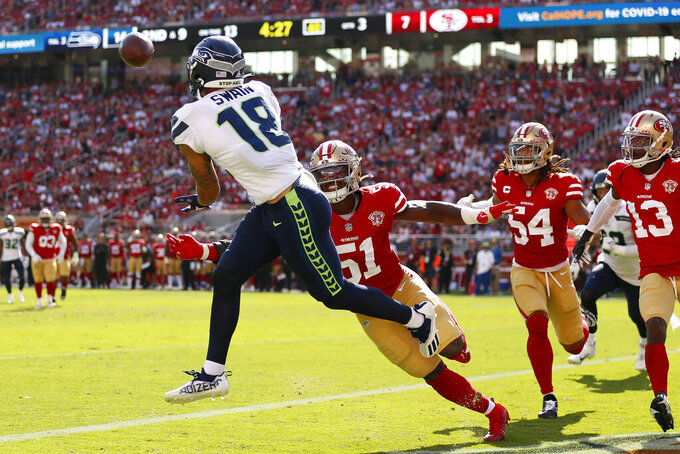 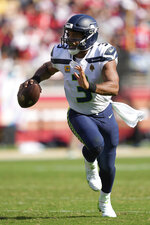 SANTA CLARA, Calif. (AP) — Russell Wilson spun away from a sack and delivered a perfect strike for another TD pass.

Seattle's sluggish start and and rare losing streak were a thing of the past thanks to another vintage performance from their star quarterback.

Wilson overcame a rough opening to the game by throwing for two touchdowns and running for a third and the Seahawks rebounded from back-to-back losses by beating the San Francisco 49ers 28-21 on Sunday.

“I thought Russ was spectacular today," coach Pete Carroll said. “It was so hard early. He just stayed the course, stayed with it and really kind of recaptured a chance to win this game when you wouldn’t think there was any way. It just didn’t look like it was going to happen.”

The Seahawks (2-2) went three-and-out on their first five drives of the game and appeared in danger of their first three-game losing streak in a season in nine seasons with Wilson at quarterback.

But Wilson recovered and won for the 100th time as a starter in the regular season, joining Peyton Manning as the only quarterbacks ever to do that in their first 10 seasons.

“I’m excited about the next hundred,” Wilson said. “There’s more championships. There’s more things we want to do.”

Wilson connected on a 12-yard TD pass to DK Metcalf late in the first half and then produced two touchdowns in a span of less than a minute in the third quarter with a 16-yard run and 13-yard pass to Freddie Swain around a fumbled kickoff by Trenton Cannon.

The TD pass to Swain was vintage Wilson, who spun away from a blitzing Dontae Johnson and avoided Nick Bosa before finding Swain for the TD that Wilson ranked as one of the top 10 plays of his career.

“I was speechless, man,” left tackle Duane Brown said. “It was one of the best plays I’ve seen from him in my time here. It’s just commonplace for him.”

Alex Collins added a 14-yard TD run early in the fourth quarter and the 49ers (2-2) were unable to overcome it after losing starting quarterback Jimmy Garoppolo to a calf injury at halftime and playing without injured kicker Robbie Gould all game.

Garoppolo threw a 21-yard TD pass to Ross Dwelley on the opening drive but did little else before leaving with the injury.

“I thought I could keep trying to go,” Garoppolo said. "It just kept getting worse and worse, traveling down to the Achilles a little bit. But we’ll get more information tomorrow with the MRI and everything. Hoping for the best right now.”

Rookie Trey Lance took over and connected on a 76-yard touchdown pass to Deebo Samuel but the Niners only crossed midfield one other time before scoring on another TD pass to Samuel with 1:20 remaining. Seattle recovered the onside kick to seal the game.

The Seahawks took plenty of time to get going offensively with five straight three-and-outs to begin the game. Seattle was held to minus-7 yards on those possessions before finally breaking through with a 28-yard pass to Collins on the opening play of the sixth drive.

Wilson then completed a 28-yard pass to Metcalf to get Seattle into the red zone and capped the drive with a 12-yard throw to Metcalf that tied the game at 7.

San Francisco scored on a the pass from Garoppolo to Dwelley on the opening drive for their 12th TD of the season.

Those scores have come from 12 players as the Niners are the first team since the merger to have 12 different players score their first 12 TDs.

Seahawks: LB Cody Barton (ribs) left the game in the first half.

49ers: Garoppolo says he hopes only to miss “a couple of weeks” with the calf injury. ... K Robbie Gould apparently injured his groin in warmups and was unavailable. Punter Mitch Wishnowsky kicked an extra point on the opening drive but missed a 41-yard FG try later in the first half. Wishnowsky then missed an extra point following San Francisco's second TD after a false start before a 2-point try. ... LT Trent Williams left in the second half with a shoulder injury. ... DE Arden Key was evaluated for a concussion.