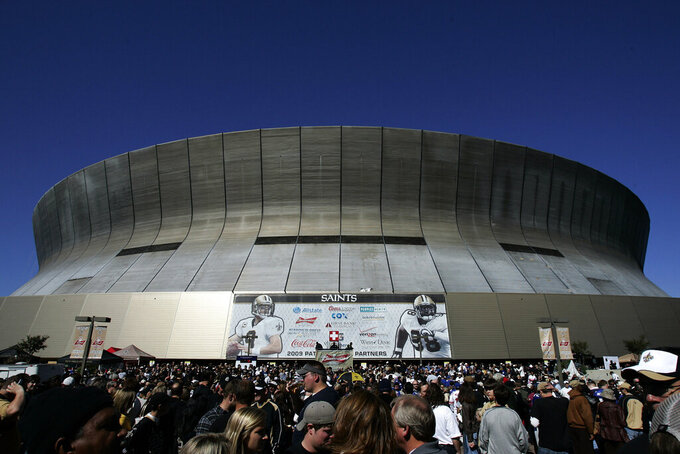 FILE - Fans arrive at the Louisiana Superdome before an NFL football game between the New Orleans Saints and the New York Giants in New Orleans, in this Sunday, Oct. 18, 2009, file photo. Amid public and political scrutiny, the New Orleans Saints have adopted a new refund policy allowing fans to relinquish their season tickets and get their money back. (AP Photo/Patrick Semansky, File)

NEW ORLEANS (AP) — Amid public and political scrutiny, the New Orleans Saints have adopted a new refund policy allowing fans to relinquish their season tickets and get their money back.

The Saints plan to fill the 73,000-seat Superdome for home games this season but have said that, in accordance with various local and state protocols, only fans who wear masks and show proof of vaccination or a negative COVID-19 test 72 hours before a game may attend.

The Saints previously stated that fans who had chosen to maintain their ticket accounts for this season would not be eligible for refunds as they had been in 2020, when government restrictions prevented large crowds in the dome.

Louisiana Attorney General Jeff Landry, a Republican who opposes mask mandates, called on state officials Wednesday to withhold funding for ongoing improvements of the state-owned Superdome unless the Saints agreed to provide refunds.

The Saints, in turn, announced the new refund policy on Thursday, noting that just 120 account holders previously requested refunds — and that anyone else who wants a refund must make a request by Tuesday.

Still, state financing for ongoing improvements at the Superdome was stalled Thursday by the Bond Commission.

Republican Senate President Page Cortez said he wanted to make sure the New Orleans Saints gave ticketholders enough time to seek refunds if they don’t want to meet entry requirements, or if they’re worried about crowd sizes during the latest COVID-19 surge.

Cortez said he wanted more time to review the refund policy and make sure the NFL organization was acting responsibly to the “taxpayers that buy their tickets and rent their suites” and are helping to finance the Superdome upgrades.

“Last season, we made the decision to offer refunds or rollover accounts to the following season because we knew government regulations would not allow us to fulfill a full season of attendance,” Saints spokesman Greg Bensel said.

“This is not the case this season. Based on current city and state regulations allowing full capacity, we did not plan to offer refunds for season tickets, as has been our standard policy.”

However, Bensel noted, the Saints have received “thousands of calls” from fans wanting to purchase season tickets made available by current account holders seeking refunds.

“Our preference is to have these loyal fans in the seats" rather than see other fans who'd previously requested refunds sell their tickets to visiting fans on the secondary market, Bensel added.

Bensel also noted that the Saints will allow ticketed fans who show up to the Superdome without proof of vaccination or a negative test to gain entry to games if they receive a free vaccination being offered at the dome with help from Ochsner Health System, one of the club's chief sponsors.

Fans age 12 and under will not have to provide proof of vaccination or a negative test to enter.

The club also has said that Superdome COVID-19 protocols could be eased during the season if the rates of infections drop. Recently, however, they have spiked.

Louisiana had the nation’s highest rate of new coronavirus infections over the past week per capita, and its hospitals are breaking records daily for the number of people hospitalized with COVID-19. The state health department reported 3,022 COVID-19 patients in the hospital Wednesday, 91% of them not fully vaccinated.

“We are hopeful that the city mandate is temporary and we remain optimistic that as vaccination rates increase, this policy will no longer be necessary,” Bensel said.