Saints' Jordan not letting up in 2nd decade, on field or off 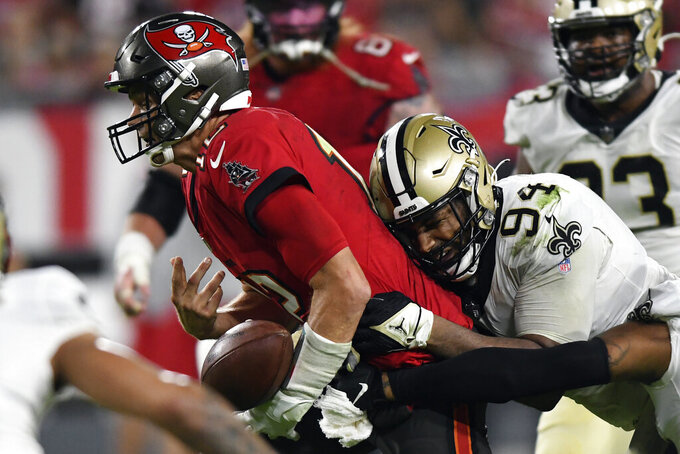 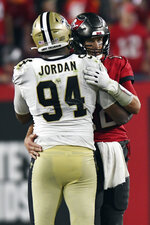 Gone were the long dreadlocks with the dyed blond ends that he wore in recent seasons.

Still present in the 6-foot-4, 287-pound Jordan was his professed love for football and confidence that his work ethic, fitness and talent could propel him to continued elite play in his early to mid-30s.

In terms of sacks, it wasn't looking good through his first five games, when he had none. But Jordan comes into Monday night's home game against Miami with six sacks in his past eight games, a seventh Pro Bowl invitation, NFC defensive player of the week honors, and no shortage of pride in the effort he has put forth all season long.

“In this first part of the season, there was a lack of defensive line depth for us," Jordan said this week, referring to fellow defensive end Marcus Davemport's Week 1 injury and top interior lineman David Onyemata's six-game suspension.

More recently, Jordan said, “You could see what happens when we have our full depth of starters, and the focus isn’t shifted on just one person.”

“I could tell you that at the beginning of the season, I was catching more doubles and triples than I think I’ve ever seen before, but that’s just a personal gripe,” Jordan continued. "I’m on full tilt. I came into this league as a run-stopper. You are not just going to define me by my sack numbers. If I went sackless for the year, I know I’ve played the hell out of that run.”

Last Sunday, when he had two sacks — not to mention a forced fumble — against Tampa Bay's Tom Brady, Jordan became just the second Saints player to reach 100 sacks. The other was linebacker Rickey Jackson, who is in the Pro Football Hall of Fame.

“In my wildest dreams, I don’t think I even thought about getting 100 sacks when I first entered the league,” said Jordan, who's father, Steve, was a six-time Pro Bowl tight end.

Jordan said he figured if he could “carve out a seven to 10-year career with 40 to 50 sacks and a couple of Pro Bowls, that would’ve been a phenomenal feat for me. That way, I wouldn’t have considered myself a failure next to my dad.”

He has now been selected to one more Pro Bowl than his father. He was an All-Pro in 2017. He also has been durable, never missing a game in his career until Dec. 12 at the New York Jets because he'd tested positive for COVID-19. That absence broke his streak of 172 straight games played.

“If you have not figured out by now, I love this game,” Jordan said. “I always want to play football."

Jordan said his joyful approach stems from his understanding that each snap “could be my last.”

"There’s only a finite amount of time that you have to play football, so you better enjoy each and every second,” Jordan said.

Saints offensive tackle James Hurst has had to block Jordan in practice and describes him as relentless and deceptive.

“He won’t take a play off,” Hurst said. “If you have 70 plays in a game, he’s going to have 70 opportunities to make an impact play: whether that’s a tackle for loss, a sack, a turnover. He’s not going to take any plays off and that’s going to increase the chances of his impact on the game.”

Hurst said Jordan has a knack for disguising what kind of block-shedding move he might be setting up.

“Whether it’s a swim move or a bull rush, whatever it may be, they all look the same,” Hurst said of Jordan's initial moves at the snap. "For a player like him, you have to bring it every play ... because with one little slip-up, he’s able to take advantage.”

Meanwhile, Jordan has established himself as a locker room leader whom teammates admire on and off the field.

He was the Saints' nominee for the NFL Walter Payton Man of the Year award. He has worked on social justice initiatives, routinely visited schools and run football clinics, among other projects — all while raising a family of his own.

“When you come in the NFL as a young player, you kind of you find vets to look up to and see how they manage the stress of football and managing your time with family and off the field stuff," Saints quarterback Taysom Hill said. "All those qualities are things that you try to emulate as a young player, find ways to give back and he’s found the right way to manage his time to make sure he’s giving back to the community and I really appreciate his example of doing that, and showing people in the locker room how to do that.”

The emphasis Jordan places on representing his team and having meaningful personal interactions with teammates is evident in how he talks about his recent sack milestone.

“It has been the relationships and connections I have built here that bring the true meaning to the 100 sacks,” Jordan said. "There’s just so much more people don’t see in the personal aspect.”