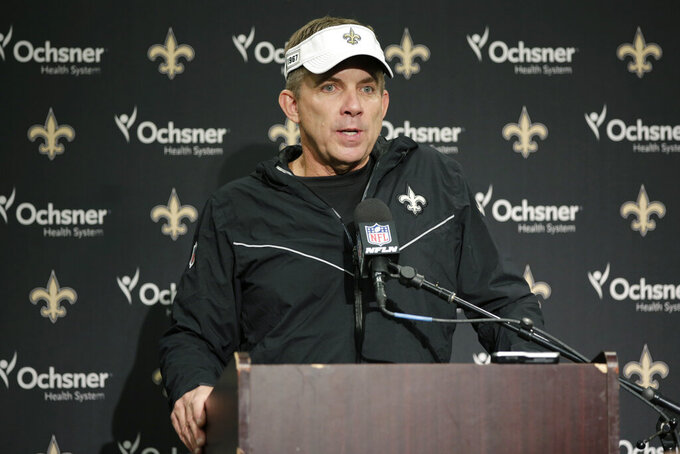 NEW ORLEANS (AP) — While the Saints were encouraged by their ability to win their first game without Drew Brees, it remains to be seen if they can find a sustainable recipe for victory during their record-setting quarterback's absence.

"Statistically, if you looked and said you're going to return a punt for a touchdown and score defensively, you're going to be probably a 90-something percent winner," Saints coach Sean Payton said.

Led by backup QB Teddy Bridgewater, the Saints' offense didn't account for a point until the final minute of the first half on Sunday in Seattle. But thanks to a punt return touchdown by Deonte Harris and fumble return TD by Vonn Bell, it was enough to give the Saints a 20-7 halftime lead en route to a 33-27 triumph that was evidently gratifying to New Orleans.

Now back in sole possession of first place in the NFC South at 2-1, New Orleans' next challenge comes at home against unbeaten Dallas (3-0) on Sunday night. The high-powered Cowboys have scored at least 31 points in each of their first three games, raising the likelihood that the Saints will require more productivity on offense in what will be their second of an estimated six games without the injured Brees .

Armstead agreed that New Orleans' offense took the better part of the first half to sort out communication and other issues in Seattle. That left the Saints struggling to overcome penalties and kept Bridgewater from establishing a comfortable tempo. But from the end of the second quarter on, "The offense moved pretty efficiently," Armstead asserted. "We were able to impose our will in a few areas that was encouraging and we can see more of that going forward."

Bridgewater wound up with two touchdown passes, both on short, high-percentage throws to star skill players: The first was to running back Alvin Kamara and the second to receiver Michael Thomas. Kamara finished with 161 yards and two TDs from scrimmage, including nine catches for 92 yards.

"It just took me to realize that I have one of the best wide receivers in the NFL here and I get to throw the ball to him whenever I feel like it," Bridgewater said. "Just use your guys. You watch Alvin making plays all day. You watch Mike when you throw it to him, it's a for-sure catch."

Payton seemed particularly pleased by the way his offense put the game away, keeping the ball for 5:22 in the middle of the fourth quarter before Kamara powered in from 1 yard to make it 33-14 with less than five minutes left.

"Teddy is going to be just fine. The rest of us have to worry about our job," Payton said. "If we can surround him with a lot of good performances like we did (Sunday), we are going to have success."

Special teams. Harris' 53-yard punt return was the highlight, but punter Thomas Morstead also had a major influence on the game when it came to field position. Morstead booted two punts inside the 5-yard line and averaged 54 yards on six punts.

Payton is not pleased with the frequency of penalties his team has committed. In Seattle, the Saints were penalized 11 times for 70 yards. That was one week after New Orleans committed 11 penalties for 87 yards in Los Angeles.

"As a team, overall, we still are high on penalties," Payton said.

Bell's relentless pursuit produced more than his 33-yard fumble return for a touchdown. He made or assisted on nine tackles and broke up a pass.

The Saints hope Latavius Murray, signed away from Minnesota as a free agent, will give them more physicality in the running game. While he ran for a 30-yard TD in a season-opening victory against Houston, he's been far less a factor the past two weeks, with five carries for 7 yards in Los Angeles, two carries for 2 yards in Seattle.

250 — The Saints won despite being outgained by that many yards in Seattle (515-265). It's a reminder of the extent to which big or timely plays can trump offensive statistics. New Orleans complemented two non-offensive touchdowns with field-position-flipping punts, nine defensive stops on third downs and three on fourth downs.

After the Saints play the Cowboys, they face four teams that stumbled out of the gate to various extents this season: Tampa Bay, Jacksonville, Chicago and Arizona.