Saints, Washington face off, both 2-2 and struggling 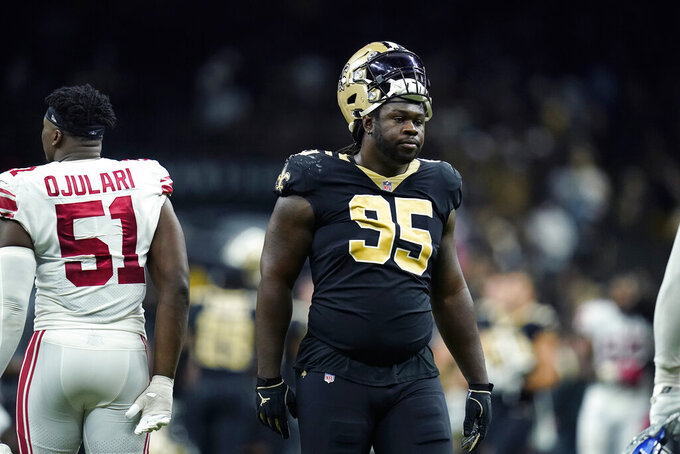 OPENING LINE: Saints by 1, according to FanDuel SportsBook.

TURNOVER DIFFERENTIAL: Saints plus-5; Washington minus-3.

SAINTS PLAYER TO WATCH: RB Alvin Kamara, who rushed 26 times for 120 yards but did not have a catch against the Giants. That was partially because of Tony Jones Jr. leaving with injury, and the addition of Devine Ozigbo off Jacksonville's practice squad could free up Kamara to participate more in the passing game.

WASHINGTON PLAYER TO WATCH: QB Taylor Heinicke, who has thrown for 960 yards and rushed for 87 since replacing injured starter Ryan Fitzpatrick in Week 1. Heinicke is still balancing when to push for that extra first down or touchdown, but this reckless abandon is what has made Washington's offense work and be fun to watch.

KEY MATCHUP: Heinicke and Washington's offensive line vs. the Saints' pass rush. New Orleans did not sack Giants QB Daniel Jones last week, and Heinicke has a similar ability to evade pressure and take off with the ball. Heinicke sees some things on film he might be able to exploit, and the Saints' ability to adjust could be the difference.

KEY INJURIES: Saints LT Terron Armstead missed the Giants game with an elbow injury. C Erik McCoy has been out since Week 1 with a calf injury. Washington will be without TE Logan Thomas after putting him on injured reserve with a hamstring injury and could also play without 2020 All-Pro RG Brandon Scherff (right knee). WR Curtis Samuel missed practice Wednesday with a groin injury, which caused him to miss the first three games of the season. Washington could be depleted at receiver if Dyami Brown (knee) or Cam Sims (hamstring) is out.

SERIES NOTES: New Orleans coach Sean Payton is facing Washington's Ron Rivera for the 19th time. The Saints won 10 of 18 games against Rivera's Carolina Panthers from 2011-2019, including once in the playoffs. ... Payton is 3-4 in his career against Washington. ... The Saints have won the past two meetings between the teams. ... Washington last beat New Orleans in 2015, when Kirk Cousins was the starting quarterback in Jay Gruden's second season as coach.

STATS AND STUFF: New Orleans is coming off allowing 485 yards to the Giants. Washington gave up 374 yards to Atlanta. ... Saints QB Jameis Winston threw for 297 yards and a touchdown in his only career start against Washington in 2015 with Tampa Bay. ... QB Taysom Hill ran for two touchdowns last week. Hill has a rushing TD in back-to-back games. ... Kamara has topped 90 yards from scrimmage in seven of his past eight games. ... WR Marquez Callaway had a team-best 74 yards receiving against the Giants. ... TE Juwan Johnson has three TD catches this season, tied for second among tight ends. ... New Orleans signed K Cody Parkey to replace Aldrick Rosas, who missed a 58-yarder last week. ... S Malcolm Jenkins is facing Washington for the 15th time in his NFL career and first since rejoining New Orleans after six seasons with Philadelphia. Jenkins had a season-high 12 tackles last week. ... Rookie LB Pete Werner made 10 tackles against the Giants. ... CB Marshon Lattimore played at Ohio State with Washington WR Terry McLaurin. ... Heinicke threw for three TDs in Washington's comeback victory at Atlanta. Heinicke has eight passing TDs, one rushing and three interceptions since taking over. ... RB Antonio Gibson had 75 yards from scrimmage against the Falcons despite dealing with a shin injury. ... RB J.D. McKissic caught the go-ahead TD pass from Heinicke last week. ... McLaurin had six catches for 123 yards and two TDs at Atlanta. It was his eighth career game with 100-plus yards receiving in two-plus seasons. ... TE Sammis Reyes could become the first Chilean player to appear in an NFL game. ... Wes Schweitzer is expected to start at right guard in place of Scherff. ... Reigning Defensive Rookie of the Year Chase Young has been held without a sack through the first four games. ... DE Montez Sweat picked up his third sack of the season last week. ... First-round draft pick Jamin Davis steps into the starting lineup after LB Jon Bostic's likely season-ending pectoral muscle injury.

FANTASY TIP: Winston, Hill, Kamara, Callaway and just about every Saints offensive skill player is a must start given Washington's defensive struggles. Washington has allowed points on each opponent's opening drive — three TDs and a field goal — and could be ripe for another rough game unless things change drastically.