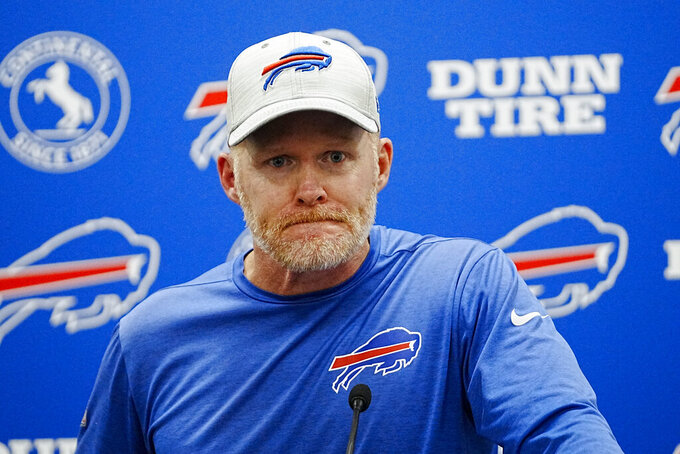 SAN DIEGO (AP) — San Diego State football coach Brady Hoke said Monday he didn't know star punter Matt Araiza had been accused of participating in the gang rape of a 17-year-old girl at an off-campus party in October until a civil lawsuit was filed last week.

Hoke's boss, athletic director John David Wicker, defended the school administration's decision to obey the San Diego Police Department's request to delay a campus-led inquiry into the alleged gang rape until authorities finish their criminal investigation. The incident happened on Oct. 17 at a Halloween party at a home where Araiza had been living.

Araiza, nicknamed the “Punt God” and honored as a consensus All-American for his booming kicks that helped SDSU to a school-best 12-2 season, was cut by the Buffalo Bills on Saturday, two days after the civil lawsuit containing graphic details was filed against him and former teammates Zaver Leonard and Nowlin “Pa’a” Ewaliko. Leonard and Ewaliko are no longer with the team, Wicker said.

The school's decision to accede to the SDPD was criticized by rape survivor and public speaker Brenda Tracy, who was brought in by SDSU to speak to the football team and other male athletes nearly three weeks after the alleged assault. Tracy said in a statement posted on Twitter on Sunday night that she had been told by an SDSU staff member “that there was an incident that had happened.”

Tracy added that as she learns more details, “it is becoming more obvious that SDSU did not do the right thing. Institutions should not defer to police investigations. Title IX and criminal cases can run concurrently. ... Even without the victim directly reporting to the school, her father did, and the school could have reached out to him. Anonymous tips, one of which included a name, should have been followed up on immediately.”

Wicker confirmed that Tracy had been brought to campus.

“It is absolutely not true that we swept this under the rug because it was football, because we were having a successful season,” Wicker said. “That is not who we are and that is not who I am. That calls into question my morals and my ethics and that’s not true.”

“I still firmly believe that allowing SDPD to handle the investigation of this was the right way to go," Wicker said. “SDPD asked us not to investigate because they felt like it would impede or potentially impact negatively their investigation, so we chose to do that.”

Wicker said that included even an informal investigation such as a coach asking a player if he had heard anything.

“SDPD asked us not to investigate. If we start asking questions you can tip someone off, and we’re not going to investigate," Wicker said.

No arrests have been made and police have not publicly identified any suspects. The results of the police investigation are in the hands of the district attorney, although there is no timeline for a decision on whether charges will be filed. SDSU said it was cleared by the SDPD on July 22 to begin a campus investigation.

The plaintiff in the lawsuit is now 18. She is identified in the complaint as “Jane Doe” because she was underage at the time.

Attorney Kerry Armstrong, who represents Araiza in the criminal investigation, called the allegations untrue based on the findings of an investigator he hired.

The Los Angeles Times has reported that Araiza’s name surfaced in connection with the rape allegation within days of the party in at least one report made by student-athletes to San Diego State officials through an anonymous reporting system.

Asked if he knew about that anonymous report, Hoke said: “I was not aware.”

Asked at what point he first heard Araiza's name mentioned, Wicker said: “We did not receive confirmation from anyone that was party to the event until the civil lawsuit dropped.”

Meanwhile, the Bills say they have moved on from Araiza.

“We’re already past it. It’s over with,” offensive lineman Dion Dawkins said after the Bills returned to practice Monday, two days after the team announced Araiza's release. “He’s not here. It’s not our problem. Done.”

Dawkins acknowledged he was he was troubled by the allegations made against Araiza in the lawsuit.

“The thoughts always come, but you’ve just got to try to keep your mind right and not think about stuff that you can’t really control,” Dawkins said. “Because if you think about all the rest of the messed-up stuff that goes on in the world, you’ll literally malfunction.”

Before practice, coach Sean McDermott addressed the players about Araiza’s release, which was announced more than two hours after the team completed practice on Saturday. Team officials, including McDermott and general manager Brandon Beane, were first made aware of the allegations when they were told in late July that Araiza was one of a number of San Diego State players targeted in a police investigation.

Araiza was set to become Buffalo's punter when the team released Matt Haack last week, but the Bills then reversed course. Center Mitch Morse defended the team’s handling of the situation.

“I think they’ve handled it admirably because I don’t envy those situations,” he said. “In the end, I do think they made the right decision.”