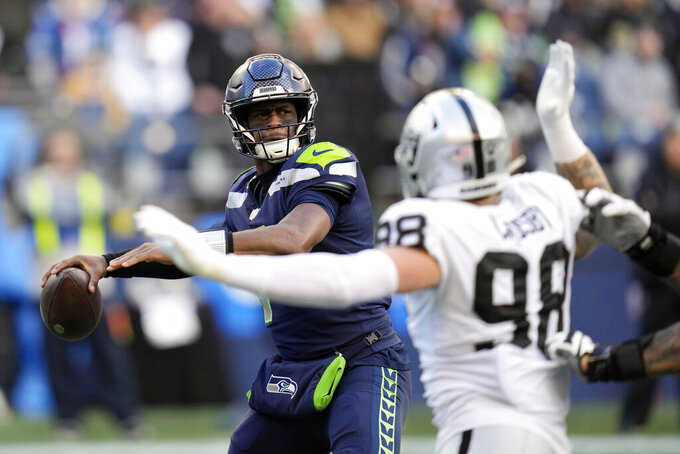 TURNOVER DIFFERENTIAL: Seahawks plus-4; Rams minus-7.

SEAHAWKS PLAYER TO WATCH: S Quandre Diggs had two interceptions in the first quarter against the Raiders, single-handedly extending Seattle’s six-game streak of multiple takeaways. It is the team’s longest such run since 2013. Diggs needs one interception to become the only player in the NFL with at least three interceptions in each of the past six seasons.

RAMS PLAYER TO WATCH: WR Van Jefferson will be the focal point of whatever production Los Angeles can generate in the passing game with Allen Robinson (foot) joining Cooper Kupp (ankle) on injured reserve. Jefferson had three receptions for 29 yards against Kansas City, getting his second touchdown catch in three games since debuting following offseason knee surgery.

KEY MATCHUP: Seahawks RB Kenneth Walker III vs. Rams LB Bobby Wagner. It’s been tough going for the standout rookie the past two games, managing 43 yards rushing on 24 carries in losses to Tampa Bay and Las Vegas. He did have impressive TD runs of 12 and 14 yards against the Raiders last week, but was otherwise stymied. Walker will face another tough test from a Los Angeles run defense allowing 3.9 yards per carry. Wagner, who played his first 10 seasons for the Seahawks, leads his new team with 49 tackles.

KEY INJURIES: S Ryan Neal is the only Seahawks starter that appears in question because of elbow and shoulder injuries suffered in the loss to the Raiders. Neal sat out of practice early in the week, but the Seahawks are optimistic he’ll be able to play. ... Rams DL Aaron Donald (high ankle sprain) will not play because of injury for the first time in his nine-year career. ... Coach Sean McVay isn’t disclosing who will start at QB as Matthew Stafford (concussion protocol) isn’t expected to play. John Wolford hasn’t been available the past two weeks because of a neck injury.

SERIES NOTES: The Rams swept the two-game season series against the Seahawks in 2021, improving to 7-2 in the past nine games against NFC West opponents. ... Los Angeles is 5-1 at home against Seattle since moving back from St. Louis following the 2015 season. ... Wolford started against Seattle in a wild-card playoff game in the 2020 season, but was knocked out of the 30-20 win early on because of a neck injury.

STATS AND STUFF: QB Geno Smith needs 245 yards passing to set a single-season career high. Smith had 3,046 yards passing as a rookie in 2013. ... Walker leads all rookies with nine rushing touchdowns. He’s tied for fourth in the league overall. ... WR Tyler Lockett is one of two wide receivers with at least six touchdown catches in the past five seasons. Stefon Diggs is the other. ... The Seahawks have given up three sacks in three of the past four games. ... After having 19 sacks in a four-game span, the Seahawks have just one sack in the past two games. ... Seattle gave up 283 yards rushing last week against Las Vegas. That’s the most under Pete Carroll and most allowed since 2000. ... The Seahawks have lost four straight against the Rams in Los Angeles, but won at SoFi Stadium earlier this season by beating the Chargers. ... The Rams have lost five straight games under McVay for the first time. It is their longest skid since closing out the 2016 season with seven straight defeats. ... Rookie RB Kyren Williams had a career-high 11 carries and 14 touches against the Chiefs. However, he managed 60 total yards from those chances. ... QB Bryce Perkins made his first career start versus Kansas City, completing 13 of 23 attempts for 100 yards with one touchdown and two interceptions. He also rushed for 44 yards on nine attempts. ... Despite generally producing one of the NFL’s best pass rushes in recent seasons, Los Angels is sacking the quarterback on 5.95% of drop-backs this year. That ranks 23rd in the league. ... DB Jalen Ramsey has never intercepted a pass in five games against the Seahawks since joining the Rams. He did have one pick of then-Seattle QB Russell Wilson in 2017 when Ramsey was still with Jacksonville. ... Los Angeles has gone at least .500 in division play since McVay took over in 2017. However, with a 1-3 record this season, they will need to sweep Seattle to continue that mark.

FANTASY TIP: Seahawks WR D.K. Metcalf has never had 100 yards receiving in six regular-season games against the Rams. He has three touchdown receptions, two of which came in a Week 5 loss in 2021. There could be better options elsewhere for those chasing down a playoff spot.