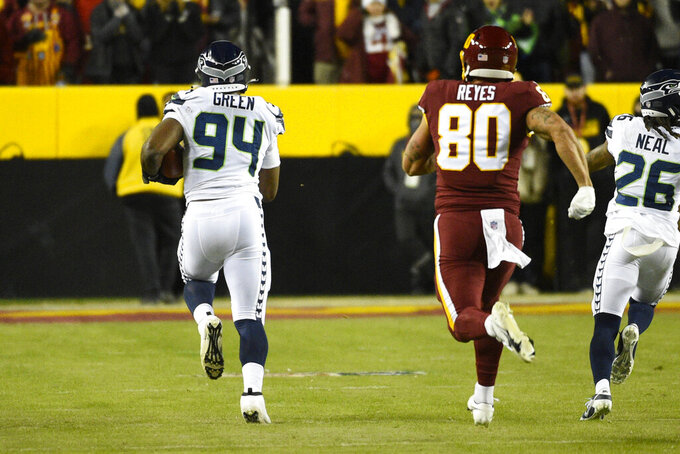 LANDOVER, Md. (AP) — Rasheem Green broke through Washington's front to block an extra-point attempt, recovered the ball and rumbled all the way to the end zone.

It was good for two Seattle Seahawks points and a little bit of NFL history.

Green became the first player to block, recover and score for a defensive conversion since the league allowed for the possibility on extra points beginning in 2015. It was the first blocked kick returned for a score since 2019, and the 11th over the past seven season, with seven of those coming on a PAT.

The play turned out to be the Seahawks' biggest bright spot in a 17-15 loss to Washington, which extended their skid to three games.

"That’s a rare play that happens, but it was a great effort," coach Pete Carroll said. “He been close so many times, it’s just fitting that he finally got one. But to pick it up and run and do it all, man, what a great moment."

According to the NFL's Next Gen Stats, Green reached a maximum speed of 18.41 mph on his 94-yard return, the fastest rate by a defensive lineman as a ball carrier since Jadeveon Clowney in 2019.

"He has been phenomenal all year long and always going," Carroll said. "It was a great play for the game and gave us a chance to tie the thing up.”

If Joey Slye had converted on the extra point, Washington would have led 10-9 late in the first half. Instead, the score was tied at 9 — which opened the door for Russell Wilson to lead a 96-yard touchdown drive that cut it to 17-15 with 15 seconds remaining.

The play also altered the course of the game on Washington's end. Slye sustained a hamstring injury trying to chase down Green.

“Joey is one of the most explosive placekickers I’ve ever been around,” Washington punter Tress Way said. “He tried to get out the gate after big, old 94 made me look like a child trying to tackle him on that blocked PAT and was battling some hammy stuff.”

Way did kickoffs, and Washington went without a kicker the rest of the game. That forced coach Ron Rivera to go for the 2-point conversion after J.D. McKissic's second touchdown and prompted a fourth-and-goal try in the final minutes that was unsuccessful.

The result likely ended any chances of a longshot playoff bid by the Seahawks.

“We just battled all the way down to the wire,” linebacker Bobby Wagner said. “There was a lot of moments of this game where we could have just gave up, and we kept fighting and we came close, but we came up short.”