Seahawks hope they can follow past blueprint in rebuild 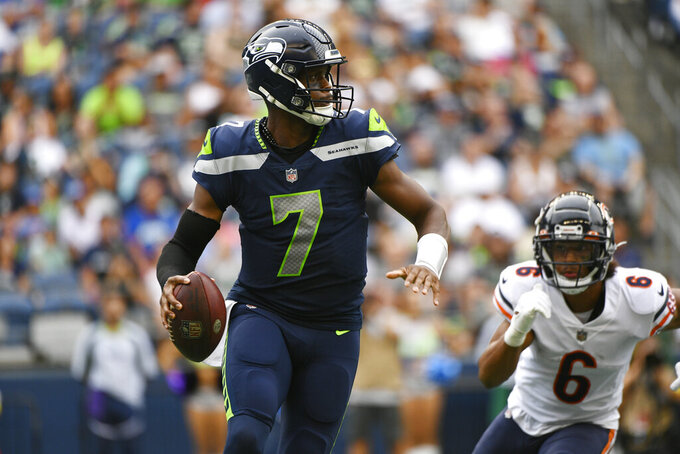 SEATTLE (AP) — When the decision was made about the future direction of the Seattle Seahawks, the choice was to trust in Pete Carroll and the belief he can again turn his team into a championship contender.

That doesn’t seem likely this year.

Not after Seattle’s tumultuous offseason that included the departures of stalwarts Russell Wilson and Bobby Wagner, the last two player connections to Seattle’s only Super Bowl-winning season in 2013.

Instead, the 2022 season has the feel of 2011 all over again. This is a long-term play with the hope the blueprint from 2011 that eventually led to that Super Bowl title — overhaul the roster, bring in an influx of young talent and hope to hit on a quarterback — can be replicated more than a decade later.

“Obviously, the Seahawks have had a high standard of play for a really long time and the cornerstone (is) the Super Bowl win,” tight end Will Dissly said. “But there’s no more of those guys around so I feel like there’s a hunger to be that next guy, to be that cornerstone, go win a Super Bowl, make Seattle know who you are.”

The Seahawks struggled in 2011 and were 2-6 in early November before rallying to finish at 7-9. And within those five wins over the final nine games, some young players showed signs of becoming foundational pieces for Seattle’s back-to-back runs to the Super Bowl in 2013-14. Richard Sherman, Kam Chancellor, K.J. Wright and Doug Baldwin all received their first opportunities to shine during that 2011 season.

What’s happening this season is not a direct correlation, but there are similarities. There are positions where the Seahawks will be relying on rookies and youth in the hopes of seeing development the same way some of those players did 11 years ago.

“By the time this camp is over, they’re going to work their way, they’re going to find their way into the rotations and their storyline will begin,” Carroll said. “We’ll see where it takes us with really high hopes. We have a lot of really cool stuff going on.”

The one obvious, glaring exception of course is the uncertainty at quarterback and whether Geno Smith or Drew Lock can be serviceable stepping in for Wilson, who is now in Denver.

If whoever the primary quarterback ends up being can be serviceable, Seattle has a glut of skill talent that could make the offense functional. DK Metcalf is fresh off a new contract. Tyler Lockett remains one of the better wide receivers in the league and the Seahawks believe the addition of Noah Fant gives them one of the deeper tight end groups in the league along with Dissly and Colby Parkinson.

But it all comes back to the quarterback. If Lock or Smith — the winner of the QB competition — is unable to run the offense well, the amount of skill talent won't matter.

If Seattle is able to return to prominence in the NFC, the 2022 draft may be the key. First-round pick Charles Cross will be the starting left tackle from day one. Third-round pick Abraham Lucas is likely to get significant time at right tackle. Ken Walker III is dealing with a hernia but if he is able to recover could see plenty of carries alongside Rashaad Penny.

Pass rusher Boye Mafe will be used extensively in Seattle’s rotation of edge players. And cornerbacks Coby Bryant and Tariq Woolen appear to be ascending toward starting sooner than later.

There will be clear growing pains, but it could be Seattle’s most impactful draft class in a decade.

On the surface, Seattle would seem to have two of the better safeties in the league with Pro Bowl selection Quandre Diggs and former All-Pro Jamal Adams. But Adams' two seasons in Seattle have been defined by injuries and an inability to maximize him to his fullest potential.

Adams is not strong in pass coverage with his best use playing closer to the line of scrimmage as a disrupter. Diggs has proven to be an excellent deep safety in coverage. How both are used in Seattle’s new defensive schemes will be worth watching to see if Adams’ strengths can be amplified and if Diggs can be even better overseeing the middle of the field.

It wasn’t a complete overhaul of the entire roster for Seattle but a handful of players will be taking on bigger roles, especially on defense. Edge rusher Darrell Taylor will be looking to build on his 6 1/2 sacks last season. Linebacker Cody Barton will move into a starting role for the first time in his career as Seattle switches to a 3-4 defense.

But no one will have a bigger role to fill than Jordyn Brooks stepping into Wagner’s role at middle linebacker and as the defensive play caller. Brooks showed last season he’s an exceptional tackler but now must prove he can also be an exceptional leader.