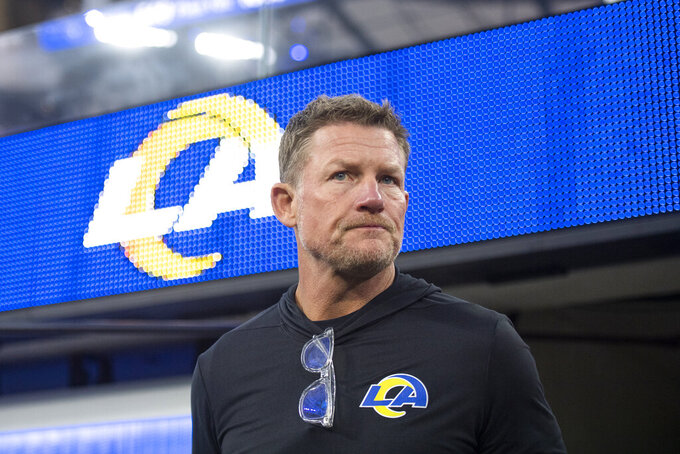 The Rams announced the extensions Thursday, several hours before they opened the NFL's 103rd season by hosting the Buffalo Bills at SoFi Stadium.

McVay finalized his new deal several weeks ago, but the Rams waited to formally announce the extensions until Snead's new contract was also completed. Los Angeles didn't announce the financial terms of the deals, but both are expected to make them among the top-paid handful of people in their positions.

“They have been crucial to many of our successes that transcend wins and losses,” Rams owner Stan Kroenke said in a statement. "They epitomize the ‘We not me’ mantra that permeates the entire organization. Their extensions are well deserved. We look forward to many more exciting seasons at SoFi Stadium as Sean and Les continue to play meaningful roles within the organization and throughout the community.”

The Rams have been in a renaissance ever since Snead hired McVay in 2017 as the youngest head coach in the Super Bowl era. Los Angeles has enjoyed five winning seasons, four playoff berths, three NFC West titles, two Super Bowl appearances and one league title in the ensuing half-decade, going 55-26 with seven postseason victories.

The 36-year-old McVay is still the youngest head coach in the NFL, and he became the youngest to win the Super Bowl last February when the Rams rallied past the Cincinnati Bengals at the Rams' home SoFi Stadium. He has the sixth-best winning percentage in NFL history among coaches with at least 50 games of experience.

The 51-year-old Snead has been in charge of the Rams' front office since he was hired by Kroenke in St. Louis in February 2012. Along with drafting the likes of Aaron Donald and Cooper Kupp, Snead has built a reputation as an aggressive roster-builder who didn't hesitate to make costly moves to improve the team, although his Rams didn't end the franchise's 12-year playoff drought until they paired Snead's personnel acumen with McVay's coaching abilities.

With Snead in charge, the Rams traded up to choose Jared Goff with the first overall pick in their first draft after coming home to Los Angeles in 2016. The Rams haven't made a first-round pick since then, with Snead repeatedly trading top draft choices to acquire talent capable of helping his team to win now.

Under Snead's leadership over the past five seasons, the Rams have sacrificed assets to land veterans ranging from receivers Sammy Watkins and Brandin Cooks to All-Pro cornerback Jalen Ramsey and edge rusher Von Miller. Los Angeles still doesn't have a first-round pick until 2024 after trading this year's pick and next year's pick — along with Goff — in the package to land quarterback Matthew Stafford, who promptly led the Rams to the title.

Snead also has a history of signing his good players to lucrative contract extensions — and then sometimes trading them or releasing them before those extensions even kick in, as he did with Goff, running back Todd Gurley and receiver Robert Woods in recent years.

Stafford, All-Pro Aaron Donald and right tackle Rob Havenstein are among the veterans who agreed to big contract extensions and restructured deals with the Rams this year.