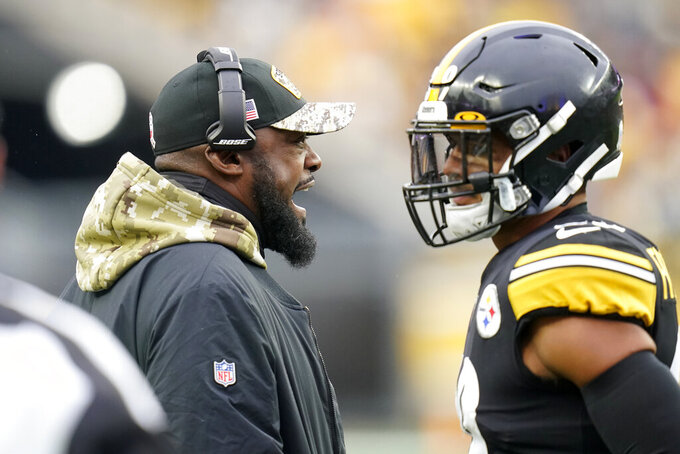 Pittsburgh Steelers head coach Mike Tomlin, left, yells from the sideline during the first half of an NFL football game against the Detroit Lions, Sunday, Nov. 14, 2021, in Pittsburgh. (AP Photo/Keith Srakocic)

That starts Sunday against the Cincinnati Bengals, who have already defeated the Steelers once this year.

His urgency is warranted.

The Bengals (6-4) are in second place in the AFC North after beating Las Vegas. The Steelers (5-4-1) are trying to rebound from two disappointing games — a tie with winless Detroit and then a loss Sunday night by four points in a shootout with the Chargers.

Cincinnati has already beaten the Steelers by double digits this season and is seeking a series sweep for the first time since 2009. Another victory such as the one the Bengals pulled off at Heinz Field in September could push Pittsburgh to the fringe of playoff contention.

The previous time the Steelers won was Nov. 8 when they edged the Bears 29-27.

Bengals coach Zac Taylor cautioned his team's upset victory on the road two months ago won't matter this time around.

“We know this is going to be a dogfight on Sunday,” Taylor said. “We know what happened the last time we played them has no bearing on this game whatsoever. Just like when they beat us up there in Pittsburgh last year, and then they came here and we won it. We put all that stuff behind us.

“To be the team we want to be consistently you have to be strong in the division,” Taylor said. “Whether it's Pittsburgh, Cleveland, Baltimore, we want our team to feel confidence every time we walk on the field that we belong and we're going to win the game. This division is so strong.”

Cincinnati could be the healthiest team in the AFC North. A few players have been banged up and missed games, but the Bengals are close to full strength, a far cry from last season.

“We feel like we have really good depth, particularly at the skill spots on offense,” Taylor said. “There's a lot of different ways you can utilize that to your advantage, and I think that's why we've been pretty efficient on offense these past six, seven weeks.”

The names around Steelers defensive end Cam Heyward seem to change by the week. The production and effort level from the 11-year veteran does not.

Heyward has been the lone constant on a unit that's seen linebacker T.J. Watt, cornerback Joe Haden, safety Minkah Fitzpatrick and defensive linemen Tyson Alualu and Stephon Tuitt limited by injuries and illness. Tuitt has yet to play this season while recovering from a knee injury, Alualu went on injured reserve in September with a fractured ankle and Watt, Haden and Fitzpatrick all sat out last week against the Chargers.

Heyward spent most of the loss to Los Angeles fighting through double teams. He only had two tackles, but one of them was at the end of a 36-yard sprint by Chargers quarterback Justin Herbert, a testament to the relentlessness that's defined his season.

“He’s been dominant for a long time,” Roethlisberger said of Heyward. “He’s a Steeler. He’s one of those guys that could’ve played in any generation.”

Bengals rookie kicker Evan McPherson likes his new nickname: “Money Mac.” The 2021 fifth-round pick out of Florida has earned it. Last week in the win over Las Vegas he became the first player in franchise history to make three field goals of more than 50 yards. He kicked four in the game and has hit 15 of 18 attempts this season. He's missed only one PAT in 30 attempts. He is 6 for 7 in attempts of 50-plus yards.

Pittsburgh's 27th-ranked defense needs some help from middle linebackers Joe Schobert and Devin Bush. The inexperience around Heyward along the defensive front is allowing opposing offensive lines to take aim at the second level.

Bush and Schobert have done little to make a difference. Bush in particular has come under fire recently for sluggish play. The 10th overall pick in the 2019 draft is 13 months removed from surgery to repair a torn ACL in his left knee and has yet to regain the explosiveness he showed as a rookie.

Tomlin is preaching patience, but allowed Bush's play has been “spotty.”

“We want more from him,” Tomlin said. “He wants more from himself. But we are appreciative that he’s put himself in position to be available and is playing as much as he is.”