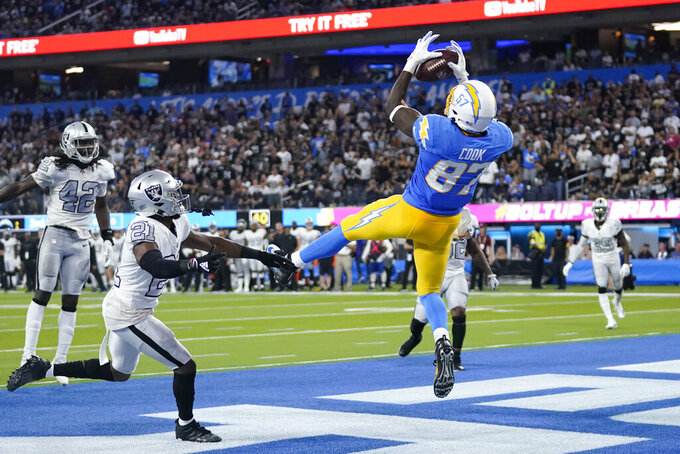 Los Angeles Chargers tight end Jared Cook (87) catches a pass in the end zone for a touchdown during the first half of an NFL football game against the Las Vegas Raiders, Monday, Oct. 4, 2021, in Inglewood, Calif. (AP Photo/Marcio Jose Sanchez)

Brandon Staley's unwavering trust in Justin Herbert and aggressiveness going for it on fourth downs have been defining traits four games into Staley's tenure as Los Angeles Chargers' head coach.

It also helped set the tone for the Bolts' 28-14 victory over the Las Vegas Raiders on Monday night.

Herbert had completions to tight end Jared Cook on a pair of fourth-and-2 plays. The second one, which came during the fourth quarter, helped extend a drive that culminated in Austin Ekeler's 10-yard TD to put the Chargers up by two scores.

The Chargers are 4 of 5 this season on fourth downs. The offense has converted all four of its opportunities. The only missed attempt was a fake punt during the first quarter Monday night.

Staley said Tuesday that even though the Chargers are showing a knack for converting, each decision has a life of its own.

“Just because hit one fourth down doesn't mean ‘oh, I feel like I’m playing with house money and I can go forward again'. That's really not what we're doing,” he said. "We’re trying to look at that independent decision like it has a life of its own and if I feel like it’s an advantage situation from a data standpoint, modeling standpoint, rhythm of a game and if I feel like that’s what’s best for us then then we’re going.

“We're making sound decisions, not reckless. There’s going to be some, where it doesn’t go right and and we’re ready to live with the consequences, but I felt like we’ve managed that well so far.”

The Chargers have been successful on all three of their fourth-and-short (4 yards or fewer to go) opportunities this season.

The Chargers are 3-1 for the first time since 2014, but the past four times they have had that mark, they have still missed the playoffs. The previous time they won three of their first four and made the postseason was 2006, when they went 14-2 and lost to New England in the divisional round.

Some thought Los Angeles' tight end production would drop off after Hunter Henry signed with New England, but Cook has 16 receptions for 181 yards and a touchdown. The catches are tied for the third most by Cook though the first four weeks in his 13-year career.

The Chargers tried a fake punt during the first quarter with punter Ty Long trying to throw a pass to cornerback Tevaughn Campbell, but Raiders wide receiver Hunter Renfrow read it perfectly and broke it up. Even if Campbell had held on to the pass, he would have been short by a yard.

Austin Ekeler had his second career 100-yard rushing game as he had a career-high 117 on 15 carries and two touchdowns, including one receiving. The fifth-year running back is third in the AFC with 424 scrimmage yards. After not having a catch in Week 1, Ekeler has 18 receptions in the past three games.

Left guard Matt Feiler allowed both sacks of Justin Herbert as well as five quarterback pressures. According to Pro Football Focus, that is the most pressures he has allowed in a game since 2018.

7: Touchdown passes by Herbert on “Monday Night Football,” which is tied for second by a QB in his first two Monday night games. Buffalo's Josh Allen holds the record with eight while Herbert, Kansas City Hall of Famer Len Dawson and the Chiefs' Patrick Mahomes each have seven.

The Chargers have a short week in preparing to host the Cleveland Browns on Sunday. Cleveland is on a three-game win streak, but Los Angeles dominated the previous meeting in 2018 with a 38-14 victory.