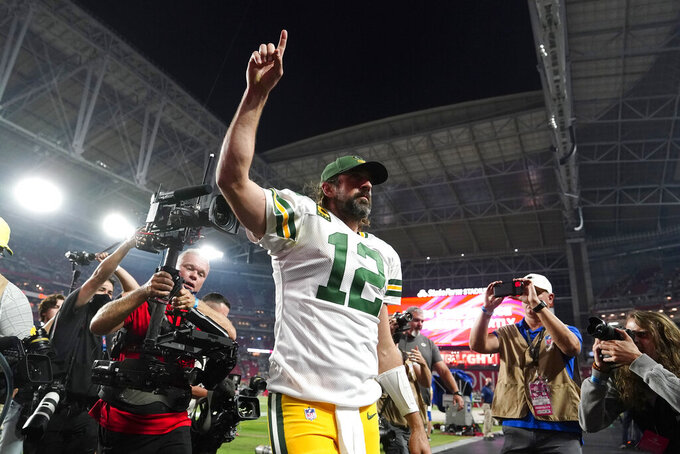 GREEN BAY, Wis. (AP) — The status of each team’s starting quarterback is the center of attention as the Seattle Seahawks attempt to beat the Green Bay Packers in Lambeau Field for the first time in over two decades.

Seattle’s Russell Wilson is practicing again after missing three games with an injured finger on his throwing hand that required surgery. Green Bay’s Aaron Rodgers isn’t practicing, but has expressed optimism he will play Sunday after a positive COVID-19 test prevented him from joining the Packers (7-2) for their 13-7 loss at Kansas City.

The earliest Rodgers could rejoin his teammates is Saturday, which has created an unusual scenario for the Packers as they get ready for this game. Jordan Love continues to get the first-team reps in practice while Rodgers participates in team meetings via Zoom.

“He’s been in every meeting (virtually)," Packers coach Matt LaFleur said of Rodgers. “He’s been engaged. So, it’s just he’s not with his guys out on the field. That’s the dynamic that you never know. But we’re fortunate to have a guy that has got a ton of reps under his belt, has played a ton of ball, so we’re pretty confident that provided he checks out well, he can go out there and play at a high level.”

One concern for Rodgers is a potential rust factor after being away from the team since the Nov. 3 reports of his positive test. Rodgers said Tuesday on “The Pat McAfee Show” on YouTube and SiriusXM that he had been doing yoga from his Green Bay home and would step up the level of his workouts as the week progressed.

Packers wide receiver Davante Adams played against Kansas City and had six catches for 42 yards after missing a game because of COVID-19. He acknowledged feeling the effects from his time away.

“I don’t know how it’ll impact Aaron or the quarterback position,” Adams said. “It’s much different movements. But I definitely was a little bit more taxed in the game than I usually would be. It kind of felt like Week 1 all over again. Wasn’t anything crazy, and I don’t think it was the COVID that did it. It was more so me stationary, not moving around for 10 days, which doesn’t seem crazy, but when you’re moving every day and getting the conditioning that we get as wideouts, you definitely notice a difference.”

Wilson has been able to practice this week and is hoping to play Sunday. The Seahawks (3-5) certainly need him as they try to get back into playoff contention after going 1-2 in the three games Wilson missed.

“I'm not 100% yet, but I'm pretty dang close,” Wilson said. “I would say I'm in the 90th percentile, if not higher. I feel great. I've got great conviction in what I'm doing and how I'm doing it. My mindset's better than ever. I'm ready to roll and ready to go.”

The Seahawks haven’t beaten the Packers in Green Bay since a 27-7 triumph in 1999. The Seahawks have lost six regular-season game and three playoff contests at Lambeau Field since.

They’re looking forward to the opportunity to end that streak.

“I remember my first time going there,” Seahawks cornerback Quandre Diggs said. “It’s probably the only stadium I’ve ever taken pictures in and was like, ‘Dang. I get to play here.’ You always see Sunday and ‘Monday Night Football’ at Lambeau. Dang. That’s one of those places I can tell my kids I actually played in when they get older and understand about the game.”

Seattle linebacker Bobby Wagner needs just seven tackles to reach 100 for the 10th straight season. Wagner’s longevity and consistency have been hallmarks of his career and partly why he has been an All-Pro selection each of the past five seasons.

Green Bay is looking to bounce back from a dreadful special teams performance at Kansas City.

The Chiefs got a field goal in that game after starting a possession on the Packers 10 because a punt bounced off the foot off Green Bay’s Malik Taylor. Mason Crosby missed a 40-yard field goal and had a 37-yarder blocked.

Crosby has gone 4 of 10 on field-goal attempts after making a franchise-record 27 straight.

How Seattle manages its running game will be closely watched. Alex Collins has taken the bulk of the responsibility since Chris Carson was sidelined by a neck issue. Rashaad Penny has struggled in his limited opportunities since coming off injured reserve.

Seattle may have Carson back this week after he returned to practice from injured reserve. But even if Carson is added to the roster and plays, it would likely be in a limited role to start out.

Green Bay’s David Bakhtiari was activated from the physically unable to perform list Wednesday, but the Packers weren’t yet saying whether the 2020 All-Pro left tackle will make his season debut against Seattle. Bakhtiari hasn’t played since tearing his left anterior cruciate ligament on Dec. 31.