Steelers OC Matt Canada: 'I need to do better' 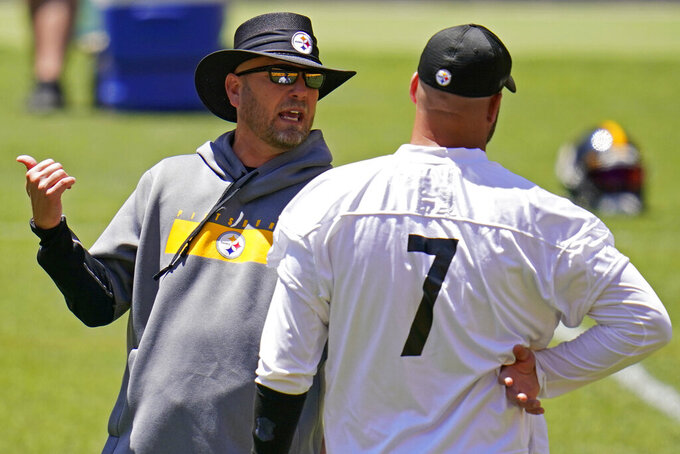 The first-year play-caller also thinks it's perhaps a bit misguided. Canada knows he was promoted in January to help create a system that would not force the Steelers to rely so heavily on the now 39-year-old Roethlisberger.

So far, it hasn't happened. The running game is last in the NFL and the line featuring three entirely new players is struggling to keep Roethlisberger upright.

Pittsburgh has three offensive touchdowns through eight quarters while allowing four sacks and 16 quarterback hits heading into a visit by Cincinnati (1-1) on Sunday. That's not the kind of ratio that leads to a successful season, and Canada knows it.

“I think I need to do better,” he said Thursday.

Roethlisberger repeatedly tried to take the heat for a 26-17 loss to Las Vegas last week, saying he had to play better. Canada appreciated the gesture, but added it's not representative of what actually happened.

“We've got to put our players in position to make plays, we thought we did that,” Canada said. “But we didn't win, so we didn't (actually put them in position).”

Canada is dealing with the unenviable task of trying to help make sure the Steelers keep the championship window during Roethlisberger's Hall of Fame career open as long as possible while making sure an offense featuring four rookies isn't overwhelmed in the process.

It's a delicate balance that, at the moment, Pittsburgh can't seem to locate. First-round pick Najee Harris has just 26 carries for 83 yards through two weeks, mostly because there is little room available.

Save for a couple of downfield heaves to Chase Claypool, the passing game has featured the same short-to-intermediate passes that became all too predictable during the Steelers' 1-5 finish to 2020.

“There's a million things we're trying to get done with our offense with new pieces and young guys and all those things," Canada said. “We obviously know Ben's strengths and try to lean on him between series and do what he wants to do.”

Well, do almost everything he wants to do. Roethlisberger enjoyed wide latitude under former offensive coordinator Randy Fichtner, frequently going to an up-tempo, no-huddle attack that basically let him call the plays. That option — at least under its former iteration — doesn't exist at the moment.

It's not a concept that's entirely off the table. Canada said Roethlisberger can go to the no-huddle if he wants to, but the reality is Roethlisberger is no longer playing behind a line loaded with veterans, as he did for the better part of the past decade with center Maurkice Pouncey snapping him the ball and David DeCastro and Alejandro Villanueva lined up alongside him.

“If guys don't know what to do, it's going to look really really bad, right?” Canada said. “We have to make sure our guys (know where to go) and put them in position to play as fast as they can to be as successful as they can.”

Being on the field more during a game would speed up the process. The Steelers are 28th in time of possession and 29th in first downs, something that's a direct result of a running game that remains very much a work in progress. Canada believes Harris took a step forward against the Raiders — he ripped off a pair of 14-yard runs — and is hoping to get him the ball more against Cincinnati.

“It's our job, my job, to get that going,” Canada said. “We've got to get everyone more involved.”