Steelers reach midseason in the mix after nightmarish start 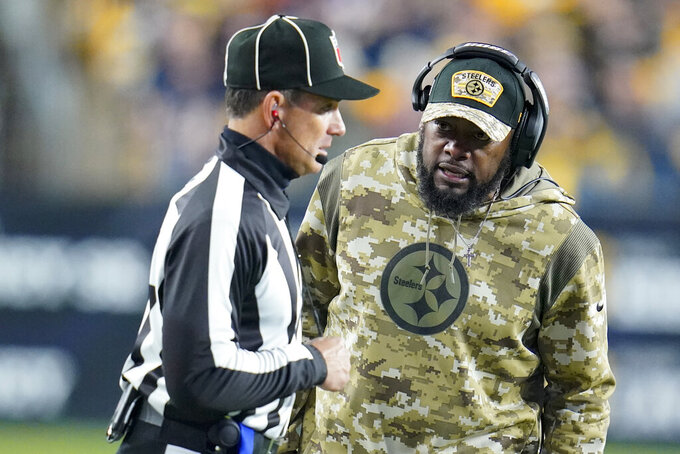 Pittsburgh Steelers head coach Mike Tomlin, right, talks to an official along the sideline as his team plays against the Chicago Bears during the first half of an NFL football game, Monday, Nov. 8, 2021, in Pittsburgh. (AP Photo/Gene J. Puskar)

PITTSBURGH (AP) — Pat Freiermuth was talking about the entirety of the Pittsburgh Steelers roster. The rookie tight end might as well have been talking about himself.

“We’re relentless,” Freiermuth said after a taut 29-27 win over Chicago boosted Pittsburgh to 5-3 as the season reaches its midway point. “We can play. We can feed off each other.”

And perhaps just as importantly, they can rely on each other.

Pittsburgh has ripped off four straight victories following a 1-3 start and finds itself closer to the top of the topsy-turvy AFC than the bottom, heady territory considering how bleak things looked a month ago.

Yet rather than panic — which coach Mike Tomlin said repeatedly was never an option — the Steelers dug in. The offense stopped turning the ball over. The running game developed traction behind rookie Najee Harris. Freiermuth supplanted Eric Ebron as the starting tight end and immediately became one of Ben Roethlisberger's favorite targets.

The 6-foot-5, 23-year-old hauled in two touchdowns against the Bears, the team's first multi-score game by a first-year tight end since Heath Miller did it in 2005. Freiermuth's production is emblematic of a rookie class tasked with keeping the Steelers competitive as the sunset draws near on Roethlisberger's remarkable career.

It's a lot of pressure, though Freiermuth and Harris hardly seemed bothered. They scored all three Pittsburgh touchdowns on Monday night and have become two of the most vital components of a unit that may be slowly but surely finding its way.

Whether the Steelers are legitimate contenders or simply the byproduct of a soft portion of their schedule — only one of the victories during their current run came against a team with a winning record — remains to be seen. Yet they are definitely in the mix. For now, they'll take it.

“I don’t even know records of (other) teams,” Roethlisberger said. “I don’t have time to focus on anybody else but us. We talk about it every week, we dug ourselves a little hole. So we’re just trying to get out of it. So, obviously, that’s all I’m focused on is us.”

While Pittsburgh's surge has helped take a bit of the pressure off the shoulders of its 39-year-old quarterback, plenty of work remains to be done. The line took a step back against the Bears, allowing three sacks and letting Roethlisberger get drilled a handful of other times. The defense looked a step behind Chicago rookie quarterback Justin Fields late. The special teams — outside of rock-solid kicker Chris Boswell — are a mixed bag at best.

At the moment, Tomlin's staff and his team are both somewhere between “good” and “adequate.” Considering what the alternative looked like five weeks ago, they'll take it.

Then again, who is?

Roethlisberger seems to have figured out whatever mechanical issues were bothering him early on. While he's not exactly lighting it up — his 90.0 rating is 21st, right between Philadelphia's Jalen Hurts and New England's Mac Jones — he's also avoiding mistakes. Roethlisberger hasn't thrown a pick since a loss to Green Bay on Oct. 3.

The second-half defense could use some work. Three times during Pittsburgh's current winning streak the Steelers have built double-digit leads. And three times they found themselves hanging on for dear life at the end. More of a killer instinct will be required down the stretch.

Second-year cornerback James Pierre forced his second fumble in three games when he punched the ball free from Chicago's Jakeem Grant on a kickoff return in the second half. A season after making the team as an undrafted rookie free agent, Pierre is playing as if he belongs.

WR/PR Ray-Ray McCloud. If the Steelers had any other truly viable options in the return game, they might be exploring them after McCloud's fumbled fourth-quarter punt return on Monday night set the stage for a rally that let Chicago take the lead in the final two minutes. McCloud did have a 12-yard reception on the game-winning drive, but he's on the roster because of his ability to return kicks.

The biggest question surrounding the second half for the defense is whether defensive lineman Stephon Tuitt returns. Tuitt is still recovering from knee surgery and dealing with the death of his younger brother, who died in a hit-and-run accident over the summer. Tuitt's teammates have expressed optimism about Tuitt coming back this season but time is starting to run out.

4 — the number of players in NFL history who reached the 60-sack plateau in fewer than 70 games. The list includes Steelers outside linebacker T.J. Watt, who did it in his 69th appearance on Monday when he had three sacks to boost his career total to 61.

Sunday's visit from the winless Lions (0-8) might be the last chance to fix things before the Steelers begin a daunting two-month sprint to the finish that includes two games against rival Baltimore as well matchups with Tennessee, Kansas City and the Los Angeles Chargers.