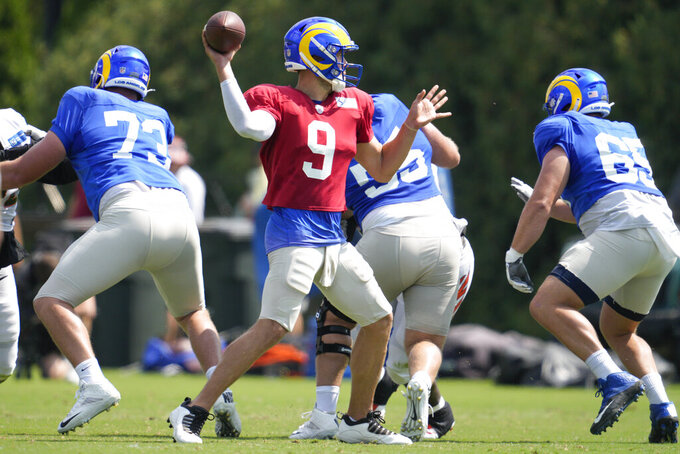 A dropped interception, a failed short-yardage attempt and a well-executed game-winning drive was the difference in sending the Rams to the title game and the Niners home to wallow all offseason at their missed opportunity.

The 49ers are seeking to reverse that result this season, starting with beating the Rams out in the NFC West.

The division that has provided the NFC champion in three of the past four seasons figures to have a couple of more contenders in 2022 with the Rams hungry for a repeat and the Niners hoping the switch at quarterback from Jimmy Garoppolo to Trey Lance can get one of the league's strongest rosters over the top.

“When you come that close to actually being in the big dance, it’s hard to taper down your expectations for the next year, especially when you think the team is just as good, if not better,” All-Pro left tackle Trent Williams said.

The Rams feel as if they are in good shape as well, even if they have stressed that last year's success will have no bearing on this year's results.

But with coach Sean McVay back with an extension and a roster with stars such as Matthew Stafford and Cooper Kupp on offense, and Aaron Donald and Jalen Ramsey on defense, Los Angeles figures to have as good a chance as anyone in the NFC.

"Just because we did something last year doesn’t mean anything’s going to happen this year,” Stafford said.

“We’ve got to go out there and earn it. Those opportunities that we got to play in those games last year were earned. You ask yourself, what kind of opportunities are you willing to earn? It comes with sacrifice and hard work and being a great teammate.”

The prospects for the other two teams in the division aren't as bright. Arizona spent much of last season in the NFC West lead before a late-season collapse followed by a playoff meltdown against the Rams that leave lingering questions heading into this season.

Seattle appears to be in rebuild mode after a decade run with the top record in the conference, having traded away star quarterback Russell Wilson.

While the biggest stars returned to the Rams, the roster did take a few key hits this offseason with star pass rusher Von Miller leaving for Buffalo in free agency, receiver Odell Beckham Jr. remaining unsigned as he rehabilitates a knee injury from the Super Bowl and the retirement of left tackle Andrew Whitworth.

Cornerback Darious Williams and right guard Austin Corbett also left in free agency, but the Rams did make a couple of key additions with the signing of linebacker Bobby Wagner and receiver Allen Robinson.

They also realize they have to deal with the burden of being defending champions as they seek to become the first team since New England in 2004 to repeat. The 17 consecutive seasons without a repeat champion are more than double the second-longest stretch without a back-to-back Super Bowl winner.

“We realize that now we’re the ones with the targets on our back,” center Brian Allen said. “We’re not chasing the Tampa Bays, the teams that won the year before. We know we’re going to have a tough schedule this year, and we’re going to get everyone’s best shot. Bring it on.”

The Niners have almost all the pieces in place with Williams, Deebo Samuel and George Kittle leading the offense and Nick Bosa and Fred Warner anchoring one of the league's top defenses.

That should make life easier on Lance, who has started only three games in college and the pros the past two seasons.

The Niners are counting on Lance's running ability and big arm to open up aspects of the offense that were missing the past few seasons under Garoppolo, but the main thing is he doesn't try to do too much.

“I think he’s in the best position he could be in as a first-year quarterback with a defense like us, a good O-line and a bunch of weapons,” Bosa said. “I think if he doesn’t make big mistakes, we’re going to be in good shape.”

If Lance falters, the Niners brought back Garoppolo as a fallback option.

Kyler Murray got his big contract extension in Arizona, but now it's up to him and the Cardinals to avoid a pattern of second-half of season collapses.

The Cardinals started the season 7-0 in 2021, but wilted down the stretch and lost a chance to win the division with a home defeat to Seattle in the finale. That was followed by a lopsided loss in the wild-card round to the Rams.

That comes a year after Arizona started 6-3 only to finish 8-8 and miss the playoffs.

The Cardinals will play the first six games this season without suspended star receiver DeAndre Hopkins.

Ever since Wilson won the starting QB job as a rookie in Seattle in 2012, the Seahawks have been the division's most stable franchise led by Wilson and coach Pete Carroll. That started to change this offseason when Seattle sent Wilson to Denver and began a rebuild process that also included the release of six-time All-Pro linebacker Wagner.

Geno Smith won a camp competition with Drew Lock to begin the season as starter. He has a talented receiving duo of DK Metcalf and Tyler Lockett and will try at least to make Seattle competitive.

“Geno, he knows our stuff and he does really well and he understands it and he commands everything that we’re doing,” Carroll said. “He’ll give us the best chance to play great football right off the bat.”