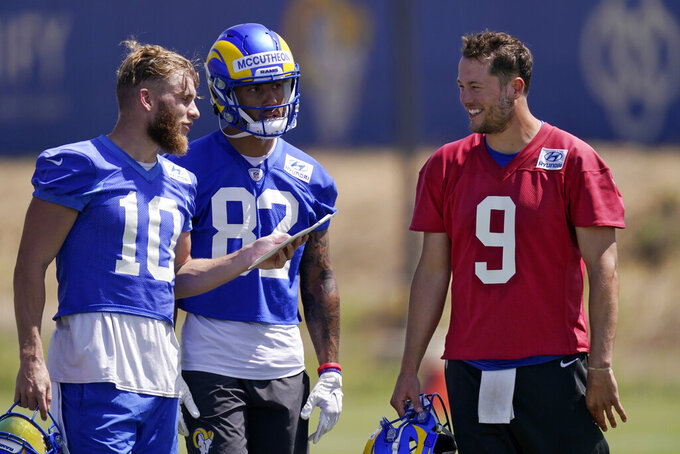 LAST YEAR: The Rams won the Super Bowl for the second time in franchise history, raising the Lombardi Trophy for the first time since returning home to Los Angeles in 2016. Coach Sean McVay's superb first half-decade culminated with an immediate title after the acquisition of Matthew Stafford, who smoothly ran an offense in which Cooper Kupp became the NFL's most prolific receiver and the Super Bowl MVP. Aaron Donald's defense improved steadily and got a turbo boost from the midseason acquisition of Von Miller, leading to increasingly dominant performances all the way to the Rams' victory over Cincinnati at SoFi Stadium. The Rams won nine of their last 10 games overall and the NFC West title before their parade.

CAMP NEEDS: As usual, the Rams need to identify starters to replace the veterans who priced themselves out of a return. The secondary looks thinner for the second straight season after Williams' departure, so new contributors must be identified. Wagner must get used to running the Rams' defense as the signal-caller, and Robinson must cement his timing with Stafford.

KEY CAMP COMPETITIONS: Rookie Bruss will attempt to beat out a few veterans to replace Corbett on the starting offensive line. Hill and Robert Rochell are the top candidates to join Jalen Ramsey in the starting secondary. Several backup running backs will fight for roles behind Cam Akers and Darrell Henderson.

EXPECTATIONS: The Rams have enough key pieces in place to become the NFL's first repeat champions since the 2004 season. McVay, Stafford and Kupp are back with an offense that should be boosted from a full season of Akers, while the defense should benefit greatly from Wagner's steady, hard-hitting presence in the middle. If injured Odell Beckham Jr. re-signs for the stretch run, a sequel title seems quite possible in Hollywood.