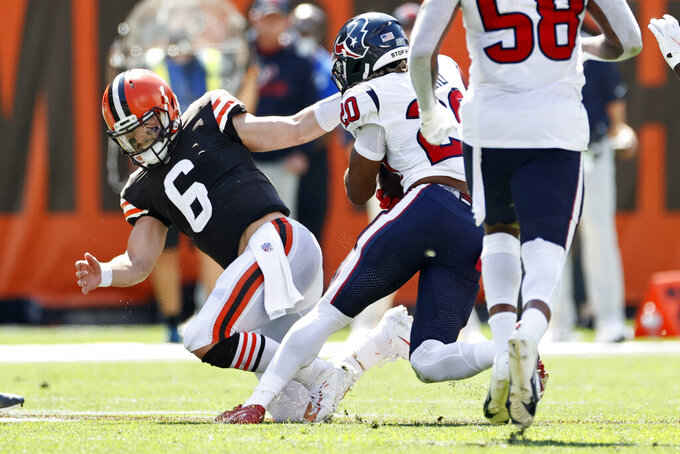 It's safe to laugh about now, but Mayfield risked personal safety — and even Cleveland's season — when he tried to tackle Houston safety Justin Reid after throwing an interception in the first half of the Browns' 31-21 home-opening victory.

In his attempt to stop a charging Reid near midfield, Mayfield got his non-throwing arm bent back and his shoulder popped out.

For a moment, Cleveland's crowd quieted as Mayfield first struggled to get up and then jogged to the locker room for treatment. Fortunately for the Browns (1-1), he didn't miss any plays and returned to lead them to their first win, albeit in unconvincing fashion.

However, the bigger issue is that Mayfield can't be so brazen.

There's never been any doubt about the QB's toughness. After getting his shoulder put back in its socket, Mayfield ran for a TD and executed a nice block on a reverse, taking out Texans cornerback and former teammate Terrance Mitchell with one hand.

But he's got to be much smarter in those situations, or he'll pay.

“That was kind of an awkward play,” coach Kevin Stefanski said. “I think their defender looked to single him out, which listen, he's trying to get him on the ground so you become defenseless in that moment.”

Mayfield said Stefanski and Cleveland's other coaches have advised him to curtail his risky behavior.

“I think on the interception it’s more so just be careful on how it’s going,” he said. “There’s definitely plays where a defense is going to try to knock you out of the game, that’s just the nature of the game. Just be careful.”

Browns linebacker Malcolm Smith was asked if he had any tackling tips for Mayfield.

Smith appreciates Mayfield's willingness to put his body on the line for the team, but not at the expense of it costing him games or worse.

“He wants to get the guy down and I respect that because you’ve seen otherwise where guys just let him score and that sucks, so I definitely appreciate it,” Smith said. "We’ll definitely have to work on the technique a little. I’m glad it wasn’t his throwing arm.”

Mayfield wasn't the only NFL quarterback hurt last week. Houston's Tyrod Taylor didn't return in the second half because of a hamstring injury, and Miami's Tua Tagovailoa (ribs), Chicago’s Andy Dalton (knee) and Indianapolis’ Carson Wentz (ankles) all went down.

Mayfield got lucky, and he's promised to adjust his game accordingly.

“There’s definitely plays when I could slide,” he said. "Now when it comes to having to get a first down and all that, I’m not going to change the way I play, because my mentality is always whatever I can do to help a team win.”

As for his aching shoulder, Mayfield said it shouldn't affect his play. He's also flying in his personal physiotherapist with a familiar, famous name to help him get ready for the Bears.

“His name’s actually Dave Matthews, not the band," Mayfield said. “He’s a big reason why I’ve been able to survive for the last three years.”