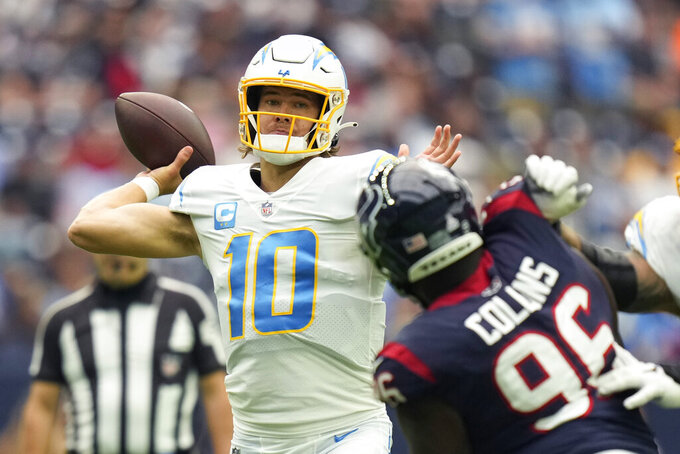 It's easy to be impressed with Los Angeles Chargers quarterback Justin Herbert's attributes and potential. So forgive Browns safety John Johnson III for stretching the truth a bit when sizing him up.

“Look at him behind the center,” Johnson said, raising his arm over his head for emphasis. “He's like 6-9.”

Well, Herbert's only listed at 6-foot-6, and that's hardly the most impressive number associated with him.

The 24-year-old QB has passed for an NFL-leading 1,250 yards as he leads the Chargers (2-2) and the league's top-rated passing attack into Cleveland on Sunday to face the Browns (2-2), whose defensive backfield has been prone to fourth-quarter breakdowns.

Johnson knows that had better not happen against Herbert.

“They’re No. 1 in passing, so if there’s a game that you’ve got to get up for and be locked in for, it’s this one,” he said. “We’ve had some flashes of good things, but I think each and every play we’ve got to be locked in or we’re going to get torched.

"If there’s a game that we need our best effort from the secondary, it’s this one.”

Herbert has done it to the Browns before. He threw for 398 yards with four touchdowns in the Chargers' 47-42 win over Cleveland last season, when the Browns' secondary showed some leakiness.

“They bust sometimes," said Chargers wide receiver Mike Williams, who caught TDs of 72 and 42 yards in last year's game. “Sometimes they let up their communication back there. The safety cut or the corner not taking a post route or anything like that.

The Browns thought they had cleaned up their issues. But the Atlanta Falcons burned them for a 42-yard play in the fourth quarter last week as Cleveland let Olamide Zaccheaus run open to make a catch and set up the go-ahead field goal.

Defensive coordinator Joe Woods is confident his group has ironed out its communication challenges. Now it's about execution for the Browns, who are allowing a league-worst 12.5 points in the fourth quarter.

“It's one of those things where you just you want to win games by two or three touchdowns, but it doesn’t happen in the NFL,” Woods said. “All of our games came down to literally the last play of the game or the last series.

“You just have to have the mental toughness to understand that is how the games are going to go.”

The Browns expect All-Pro defensive end Myles Garrett to return after he missed last week while recovering from injuries suffered in a car crash.

Garrett, who needs one sack to pass Clay Matthews for the team's career mark, suffered a left shoulder sprain and a right biceps strain as well as cuts and bruises after he flipped his Porsche while speeding.

Garrett's absence strained a defensive front also missing Jadeveon Clowney, who missed his second game with a sprained ankle. Clowney tested the ankle this week, but is concerned about coming back too soon and risk missing more time.

“I want to go bad,” Clowney said. “It would be great to have the whole front back.”

Cleveland's pass rush hasn't been the same the past two weeks, and without Garrett and Clowney a week ago, the Falcons rolled up 202 yards rushing.

Quarterback Deshaun Watson is eligible to return to the Browns on Monday while serving his 11-game suspension for alleged sexual misconduct.

Watson has not been allowed at Cleveland's training facility since Aug. 30. He's been undergoing counseling and treatment, and per league rules, he's permitted back after five weeks of his suspension.

Watson, who signed a five-year $240 million contract with Cleveland in March, can attend team meetings and work out but can't practice until Nov. 14.

Staley grew up in Perry, Ohio, less than an hour from Cleveland's lakefront stadium. He was a Browns fan as a kid, and after facing them twice on the road, he'll finally get to coach against them in his backyard.

“That was always my dream,” Staley said of coaching a game in Cleveland. “I went to games at the old stadium. With their franchise, in the last couple of years, they’ve really improved. Those fans are going to come alive when they have a team to root for.”

In the air, the Chargers are superb. On the ground, not so much.

While Los Angeles leads the league with 307.3 yards passing per game, the Chargers are last in rushing at 64.5 yards. They showed signs of life last week against Houston as Austin Ekeler ran for 60 yards, two touchdowns and had two carries over 10 yards for the first time this season.

“It’s not necessarily where we need to be but it’s a step in the right direction. I did get some runs and now I’m starting to get a feel for it,” Ekeler said. “I was able to put a couple in the end zone for the run game, you know, for one game, but can I do it again?”

In last year’s win over the Browns, he became the fifth player since 1991 with three scrimmage touchdowns in the fourth quarter.