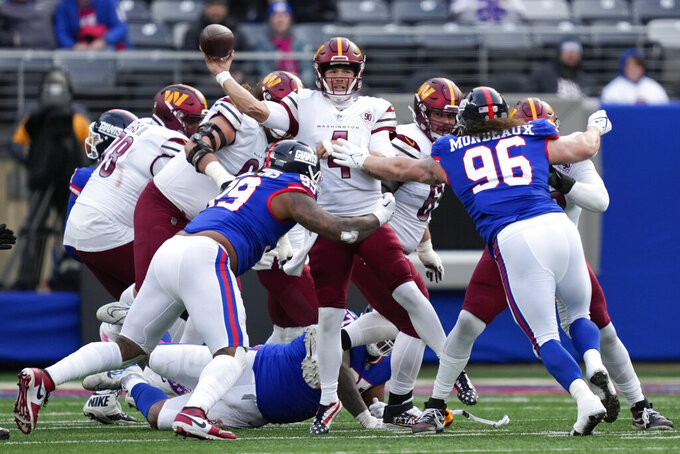 After a recent Washington Commanders victory, Montez Sweat said he and his teammates were “built” for close games and handling adversity.

It doesn't get any closer than a tie, and now they face a different kind of challenge moving forward.

Their 20-20 tie at the New York Giants on Sunday has the Commanders 7-5-1 going into their bye week with another game — next time at home — coming up against the NFC East rivals they're chasing for a wild-card spot. If nothing else, playing to a draw shows Washington's slim margin for error each week with the playoffs at stake.

“It really is kind of who we are: We play close games, we play tight games, you get some breaks, you don’t get some breaks,” coach Ron Rivera said. “ That’s our identity. We try to run the ball, be physical, keep them close and then see what happens.”

What happened against the Giants was enough mistakes to end the Commanders' three-game winning streak, from quarterback Taylor Heinicke's lost fumble to seven penalties that cost them 56 yards. Their rushing offense remains robust, but New York quarterback Daniel Jones exposed some holes in the defense along the way.

The result was a disappointing tie. Washington is set to host New York on “Sunday Night Football” on Dec. 18 in Week 15 after the game was moved into primetime.

“Over this bye week, we have to first of all get our minds right and our bodies better to get ready for this home stretch,” wide receiver Terry McLaurin said. “We got them coming back to Washington in a few weeks. The film is right there to look at, and the good thing about is we have another opportunity at these guys.”

Rookie Brian Robinson Jr. ran 21 times for 96 yards, coming up just short of his second career 100-yard game. The Commanders rushed for 165 yards as part of their new blueprint for winning.

“It was very physical,” Robinson said. “We were expecting that — a divisional game against a team who has struggled a little bit lately. We expected that they were going to play hard.”

Jones was the Giants' leading rusher with 71 yards on 12 carries. Not having linebacker Cole Holcomb or much dependable veteran depth at the position hurts when a QB such as Jones can take off and run.

“We’ve got to be disciplined, got to stay where we’re supposed to be and limit his impact,” Rivera said. “The young man makes that kind of impact that way.”

Rookie receiver Jahan Dotson made five catches for 54 yards, including a 28-yard reception that was Washington's longest play of the game. After he missed recent games with a hamstring injury, the first-round pick out of Penn State showed he can be an important piece of the offense.

Heinicke got sacked five times, fumbled twice (turning the ball over once) and was 27 of 41 passing. Rivera said he and his staff would spend the bye week evaluating what's missing on offense, and while it's Heinicke's job for now, don't discount the possibility of the Commanders going back to Carson Wentz at some point now that the 29-year-old has recovered from surgery to repair a broken finger.

Sweat was evaluated for a concussion. Offensive linemen Sam Cosmi and Tyler Larsen were also injured. Larsen, who was carted off and left the locker room on crutches, tweeted “#saferfields” after going down on turf at MetLife Stadium.

Chase Young could make his season debut after the bye week, 13 months since tearing the ACL in his right knee.

Holcomb is out for the rest of the season after undergoing foot surgery, his agent, Christina Phillips, confirmed to The Associated Press on Monday.

134 — Rushing yards allowed to the Giants, the continuation of a troubling trend after the Falcons ran for 167 against Washington the previous week.

Rest up and game plan for the Giants in a weird home-and-home series scheduling quirk.

“We went through something weirder last year: I think we had Dallas, Philly, Dallas, Philly and then the Giants, so we had five straight division games,” Heinicke said. "This isn’t as crazy as last year. It’s cool that we get a bye week in the middle. It is weird that we’re playing them back-to-back games, though.”