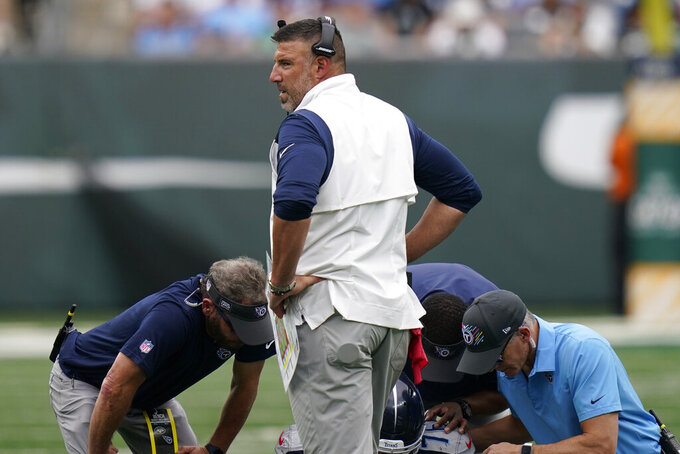 Tennessee Titans head coach Mike Vrabel stands on the field during a medical break during the second half of an NFL football game against the New York Jets, Sunday, Oct. 3, 2021, in East Rutherford, N.J. (AP Photo/Seth Wenig)

The Titans (3-2) a lready had an outbreak in August that started with coach Mike Vrabel testing positive after a preseason game in Tampa Bay. Vrabel had to quarantine for 10 days despite being vaccinated, and general manager Jon Robinson said then that the team was close to 97% or 98% vaccinated, combined with those with antibodies present.

Kern has missed the last two games with an injured right groin muscle. Johnny Townsend has replaced him in those games.

The Titans also made a flurry of moves Tuesday including placing offensive lineman Ty Sambrailo on the reserve/retired list. Sambrailo started at left tackle in place of Taylor Lewan at Seattle and played in each of the first four games.

Sambrailo was ruled out of last week's game at Jacksonville with a foot injury that limited him in practice last week. This was his seventh NFL season, and he started 19 of his 71 games in his career. Sambrailo was a second-round pick by Denver in 2015. He also was in Atlanta between 2017 and 2019.

Gray spent part of training camp with the Titans after being claimed off waivers from the Jaguars. Murray played two games at center with Kansas City in 2018 as a rookie. Murray spent the past two seasons with the Jets.