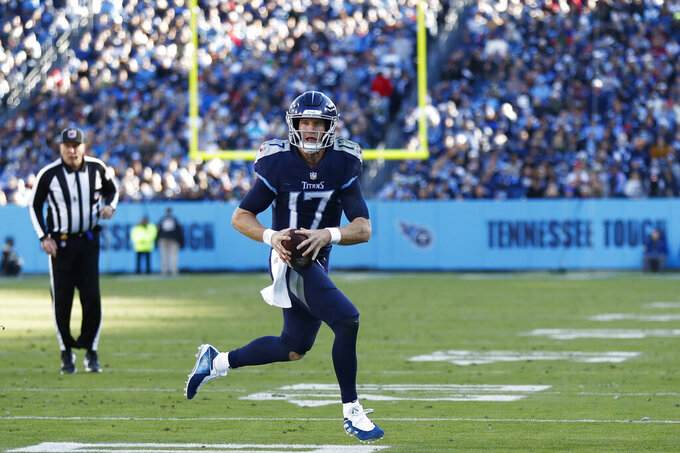 Tennessee Titans quarterback Ryan Tannehill (17) heads to the end zone for a touchdown against the Jacksonville Jaguars during the second half of an NFL football game, Sunday, Dec. 12, 2021, in Nashville, Tenn. (AP Photo/Wade Payne)

NASHVILLE, Tenn. (AP) — The Tennessee Titans returned from their much-needed bye week and got their first home shutout since 2000.

It was an about-face from the previous two games before the bye, when the Titans turned over the ball nine times with just one takeaway.

Tennessee’s defense had three sacks to go along with the four takeaways, including a sack on the Jaguars’ first play from scrimmage. The Titans also held the Jaguars to 8 yards rushing, a product of focusing on better tackling.

“We tackled exponentially better this game. It is good to see the things you emphasize and focus on translate to the game. That first play was a product of the coverage helping the rush,” Titans coach Mike Vrabel said Monday.

The Titans (9-4) earned their sixth consecutive winning season with Sunday’s victory, one season shy of the franchise record when the Houston Oilers had seven straight from 1987-93.

The Titans now turn their attention to a two-game swing in five days against foes hoping to bolster their own playoff hopes. Tennessee travels to Pittsburgh on Sunday; the Steelers still have playoff life with four games left despite being in last place in the AFC North.

After that, the Titans return home to face the San Francisco 49ers, who have won four of their past five games to get back into the NFC playoff chase at 7-6.

The defensive front. The Titans dominated the Jaguars, holding them to 192 yards of total offense, and it started up front. The line asserted its will on the Jaguars.

Tennessee got four interceptions in a game for the first time since 2012 largely due to the pressure from the defensive front that flushed Lawrence from the pocket several times. Overall, it was an elite performance, the kind the Titans will need until the offense can get healthier for the stretch run and likely the postseason.

Pass protection. It has been an issue off and on all season, beginning with five sacks allowed in the opener against Arizona. Against the Jaguars, the Titans allowed Ryan Tannehill to be sacked four times, including twice when he had no chance to avoid the rush. It was the first time in a number of weeks all five starters on the offensive line were healthy and starting. The group now must develop some cohesiveness in pass protection.

2018 first-round draft pick Rashaan Evans, who will be a free agent at the end of the year, had missed five straight games due to an ankle injury. He returned on Sunday and played well both against the run, getting a tackle for loss on the first defensive series of the game, and against the pass with one of the four interceptions, this one courtesy of a tipped pass.

“It was good to have him back out there. I felt like he was excited to play. He did some good things, did a lot of good things,” Vrabel said. “Some things that we had talked about, seeing him in here today, about just little details. Always coaching some things. He brought a physical presence, and it was good to see him run through and make a tackle.”

Randy Bullock. Bullock made two of his three field goal tries on Sunday, but the miss, a 47-yarder in the first quarter, marked the third consecutive week he has botched a kick. The Titans stashed Sam Ficken, who had won the job in training camp, on injured reserve with a groin injury, but his status remains uncertain regarding any possible return.

The Titans got the dominant defensive effort despite having three starters out. Inside linebacker David Long (hamstring) missed a fourth straight game. Cornerback Jackrabbit Jenkins (ankle) was out, though his replacement, Buster Skrine, had one of the interceptions. Nose tackle Teair Tart (ankle) was out a second straight game. TE Tommy Hudson was placed on injured reserve before the game to open up a roster spot.

0 — The number of interceptions thrown by Ryan Tannehill on Sunday. Tannehill had been plagued by five interceptions over his previous two games, both losses. On Sunday, Tannehill protected the ball, connecting on 20 of 31 throws for 191 yards. He also rushed for a touchdown.

Get ready for the stretch run. The Titans have two games in five days before getting a mini-bye that includes Christmas weekend off. They travel to Pittsburgh before returning home against San Francisco in a Thursday night game. With four games left, Tennessee needs some combination of Titans wins and Colts losses totaling two to clinch a second straight AFC South title.