Titans carry on with head coach in quarantine with COVID-19 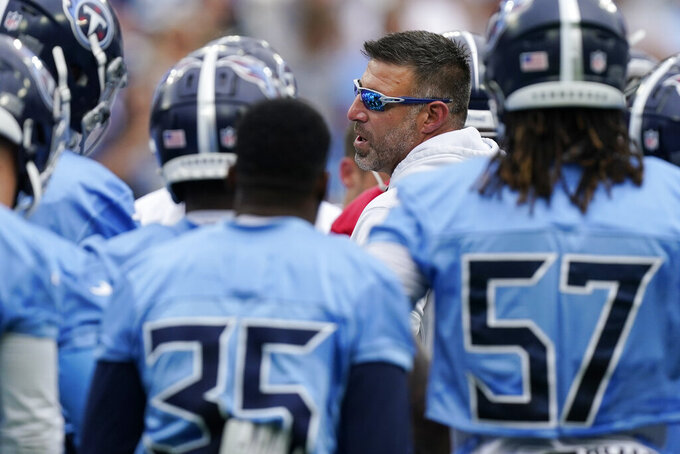 The Tennessee Titans practiced without their head coach Monday with Vrabel quarantined at home after testing positive Sunday morning.

Bowen was the first coach to test positive last September during the NFL's first COVID-19 outbreak during the season, before a vaccine was available. Vrabel disclosed this spring that he had been vaccinated.

“Get your rest and take your meds,” Bowen said. “Hopefully, we get him back sooner than I got back last year.”

The Titans' outbreak eventually involved 14 players and nine other personnel. Only Vrabel and defensive lineman Anthony Rush, placed on the reserve/COVID-19 list before Monday’s practice, have been affected so far.

“Just like we tell the players., when somebody goes down, it’s next man up,” Bowen said. “Everybody's just got to take on a little bit more. You lose a little bit obviously with his presence ... But we've got to be able to pick up the slack and get these guys going and be able to get things accomplished."

Vrabel may not be able to return before Sept. 1 at the earliest. The Titans (2-0) wrap up the preseason Saturday night hosting Chicago (1-1) with the season opener Sept. 12 against Arizona.

The Titans made some other moves Monday, apparently having seen enough to pick their kicker with one preseason game remaining.

They waived as injured kicker Tucker McCann, leaving Sam Ficken as the lone kicker on the roster after a strong week in practices and in Tennessee's 34-3 win over Tampa Bay. Ficken made field goals from 48 and 58 yards and had five touchbacks on kickoffs against the Bucs.

Vrabel said Sunday that Ficken hadn’t done anything to hurt himself.

“I think his leg has gotten even stronger since he’s got here,” Vrabel said. “And I asked (assistant coach) James (Wilhoit), ‘Is it stronger or is he just hitting it with more confidence?’ And James thinks that he’s just swinging with more confidence because it clearly looks like a stronger leg to me.”

The Titans always could bring in another kicker to challenge Ficken. But the roster must be trimmed to 80 by Tuesday afternoon with the final roster due to be cut to 53 on Aug. 31.

The Titans claimed Ficken off waivers from the New York Jets on Aug. 1 and waived undrafted free agent Blake Haubeil. McCann had been kicking well until he was hurt at the end of a field goal in the preseason-opening win at Atlanta. A rusher rolled McCann's right, kicking ankle. McCann hadn't practiced since then.

McCann, signed by the Titans as an undrafted free agent out of Missouri after the draft in 2020, has yet to kick in an NFL game.

NOTES: Derrick Henry, the AP NFL Offensive Player of the Year, did his most work yet Monday in team drills. “Just happy to be back out there full with the team practicing,” Henry said. “Knock some of the rust off and just getting out there running with speed. Just got to be back practicing and getting the swing of things.” ... The Titans also waived/injured offensive linemen Paul Adams and Ross Reynolds. They also claimed DL Freedom Akinmoladun from the Cincinnati Bengals off waivers.