Titans linebacker Bud Dupree: mind, pride got ahead of knee 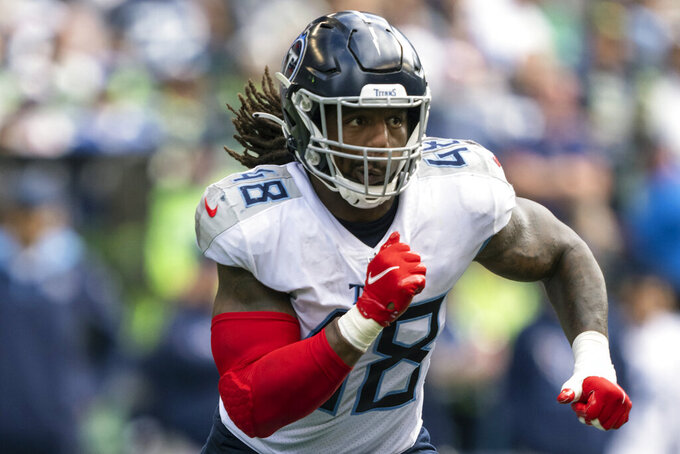 NASHVILLE, Tenn. (AP) — Outside linebacker Bud Dupree says his mind, and pride, got ahead of his body in his recovery from a torn right ACL.

Blame the eagerness of wanting to make a good impression with his new team, the Tennessee Titans, and introduce himself the right way to a new city and fans.

Each torn ACL has its own timetable for recovery, and Dupree said Thursday he tried to rush his.

“You got to put your pride down man," Dupree said. "Put your pride to the side and realize that it was my choice to go on the field. It was my mistake. And I’ve just got to be as smart as I can because it’s a long season, and I need to be on the field when it counts.”

That's why Dupree started the first two games this season. Then he dressed for a win over Indianapolis, available in case of emergency, without playing a single snap. The Titans scratched him for last week’s overtime loss to the Jets.

Dupree was limited Wednesday in his return to practice and practiced fully Thursday. Whether he plays Sunday when the Titans (2-2) visit the Jaguars (0-4) remains to be seen, but Dupree said that's a decision left up to Titans coach Mike Vrabel.

“I’m just trying to get back as soon as I can now,” Dupree said. "It’s only Week 5. We got 17 games total. I’m trying to make sure I’m available full-go through the stretch when this team is really needing me and make sure I’m giving my all and not having any setbacks on the field, any injuries ... at all.”

This is the first time Dupree has been injured like this. He tore his ACL at the start of December with the Pittsburgh Steelers. Then he joined this offseason as the Titans' biggest free agent signing to help boost an anemic pass rush. Dupree was cleared from the physically unable to perform list Aug. 6.

Games are not practice. The 6-foot-4, 268-pound Dupree found he couldn't switch directions chasing quarterbacks like he usually does. He wasn't able to play fast or physical, the signature of his game. He felt pain as he tried to fight through the difference between being hurt and being injured.

That started taking a mental toll until the realization that he may have pushed himself back onto the field too fast.

“That's another bump in the road where I got to sit back and say, ‘Well all right,'" Dupree said. “These guys tore theirs Week 2, Week 3 last year, I tore mine in December. Why I’m out on the field before them?"

Dupree says he takes full responsibility for not taking himself out of the game and letting his pride get in the way and blocking performing at his best. He noted the saying pressure either busts pipes or makes a diamond, so he's taking the time to make sure his leg is ready.