Titans place pair of starters on IR in Brown, Sambrailo 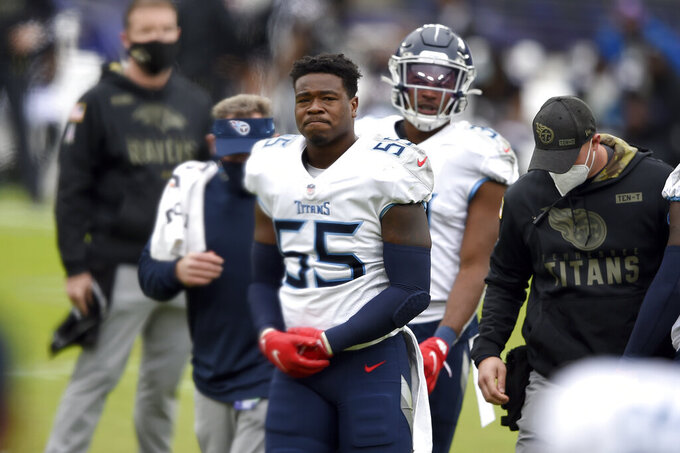 Tennessee Titans inside linebacker Jayon Brown reacts while leaving the field with trainers after suffering an apparent injury during the first half of an NFL football game against the Baltimore Ravens, Sunday, Nov. 22, 2020, in Baltimore. (AP Photo/Gail Burton)

Brown hurt his left elbow in the Titans' 30-24 overtime win over Baltimore. He's currently the Titans' leading tackler with 76 tackles, and the fourth-year linebacker also forced two fumbles and has a sack, four quarterback pressures, five tackles for loss and an interception.

Sambrailo started the past five games with three-time Pro Bowl left tackle Taylor Lewan on injured reserve, but he was hurt late in regulation of the win over the Ravens.

Kizer was a second-round pick by Cleveland in 2017, and he has started 15 of 18 games played in his career with the Browns and Green Bay. He hasn't played in a game since 2018. He was with the Raiders in 2019 and earlier this season.

Sloman was 8-of-11 on field goals through seven games this season for the Rams. Los Angeles drafted him in the seventh round in April out of Miami (Ohio).