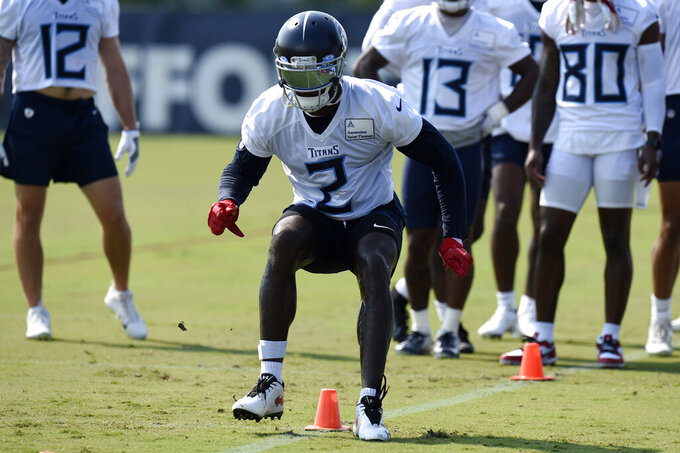 The cornerback and this spring's 22nd overall draft selection was activated from the non-football injury list, where he’d been designated while rehabilitating from a pair of back surgeries.

Farley took part in some early individual drills and received plenty of sideline guidance from veteran defensive backs Jackrabbit Jenkins and Kevin Byard. He didn’t participate in team drills but will ramp up his conditioning as camp continues.

“It’s just going to be working him back in and just trying to make sure he feels good and that the conditioning level is where it needs to be to be able to compete and get him through practice,” Titans coach Mike Vrabel said.

News of Farley’s debut was dampened somewhat by the early departure of seven-time Pro Bowl wide receiver Julio Jones from practice. Jones went up to grab a Ryan Tannehill pass in the corner of the end zone but couldn’t hold onto the ball and fell to the ground. He got up slowly, then walked gingerly to the sideline, perhaps favoring a left ankle. He later went back to the locker room.

Asked after practice if Jones was OK, Vrabel said, “Sure. (Head trainer Todd Toriscelli) said that he wanted (Jones) to go inside. We wanted to get him some team reps, which we did. So we’ll see where he’s at tomorrow and see how he looks.”

Farley was one of three Titans who passed their physicals and became eligible to practice, joining offensive lineman Ty Sambrailo and running back Jeremy McNichols. The 6-foot-2, 197-pound cornerback intercepted four passes and was an All-Atlantic Coast Conference selection at Virginia Tech in 2019 before opting out of the 2020 season due to COVID-19 concerns.

Vrabel added that Farley had been enthusiastic in camp even before hitting the practice field.

“Great personality, I love coaching him,” Vrabel said. “I’m excited to watch him play and hopefully this was a good step, a great step in hopefully a long career to get him out here on the practice field.”