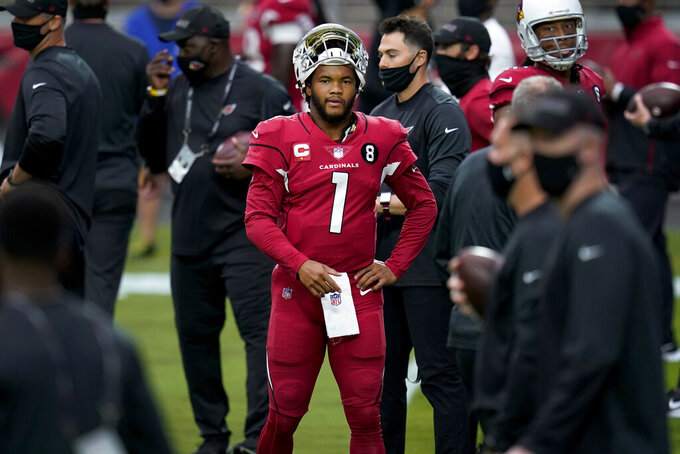 GLENDALE, Ariz. (AP) — Kyler Murray's magic legs returned on Sunday with another highlight-reel touchdown run. Unfortunately for the Cardinals, his inconsistent arm made an appearance, too.

Murray made a lot of big plays for the Cardinals for a third straight week, finishing with 270 yards passing, two touchdown passes and a spectacular 1-yard touchdown run. But his three interceptions were a crucial reason they're are no longer undefeated.

“We had every opportunity to win that game and just let it slip away,” Murray said after Arizona's 26-23 loss to the Detroit Lions. “Like I said, if I didn’t do what I did, we win the game.”

The erratic performance threw some cold water on the notion that the Cardinals are contenders in the loaded NFC West. The No. 1 overall pick in last year's draft has flashed the potential to be a top-tier NFL quarterback, but days like Sunday are a reminder he's still 23 years old.

Arizona is trending in the right direction, but there are going to be setbacks.

“When you believe you should have won a game and you didn't do the necessary things to win the game, that's going to be frustrating,” Murray said.

Duron Harmon, Jamie Collins and rookie Jeff Okudah had Detroit’s interceptions. Murray said Okudah's pick in the middle of the third quarter was particularly irritating since he threw it behind DeAndre Hopkins.

“User error,” Murray said. “That's an easy completion every day of the week.”

It was an impressive defensive performance for the Lions, which gave up 42 points the week before in a loss to the Green Bay Packers. Although Murray had the 1-yard touchdown run in the second quarter — juking past Okudah in the process — he finished with just five carries for 29 yards.

“Probably should keep the philosophy to ourselves," Lions coach Matt Patricia said. “But the guys did a good job.”

The Cardinals ran just eight plays during the fourth quarter for a total of 29 yards and scored zero points.

“We just can’t turn the ball over like that three times against a good team and expect to win the game,” Kingsbury said. “I think the percentage of that — winning a game and you have three turnovers and they have zero — is like five percent.”

Kingsbury and players had warned that a day like Sunday might be coming, even though the Cardinals started 2-0 for the first time since 2015. Arizona had rampant problems, including stagnant drives and ill-timed penalties, in its two wins.

They couldn't overcome those mistakes for a third straight week. Cardinals defensive lineman Corey Peters said there was plenty of blame to go around. He was disappointed that the Lions started their final drive on their own 9-yard line, but were able to move down the field in less than five minutes for the game-winning field goal.

“The previous two weeks we have been inconsistent at times but we found a win,” Peters said. “Sometimes winning can be a Band-Aid over things that we do wrong.

"In this league you get what you earn and today we earned a loss.”