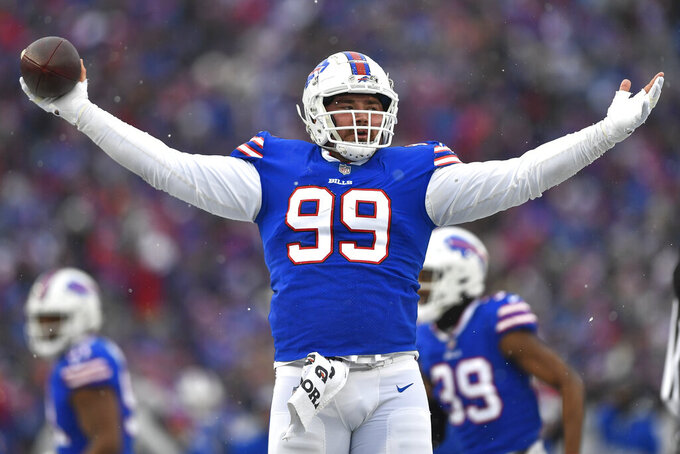 FILE -Buffalo Bills defensive tackle Harrison Phillips celebrates after recovering a fumble during the first half of an NFL football game against the Atlanta Falcons in Orchard Park, N.Y., Sunday, Jan. 2, 2022. The Minnesota Vikings began to pick away at their offseason to-do list as free agency formally opened. They agreed to contract terms with former Buffalo defensive tackle Harrison Phillips, who spent the last four seasons with the Bills, Wednesday, March 16, 2022. (AP Photo/Adrian Kraus, File)

Phillips will replace Michael Pierce, who was released this week. He played the last four seasons with the Buffalo Bills, after being drafted in the third round of Stanford in 2018. He played a career-high 474 snaps in 2021 for the Bills.

Mundt spent the last five years with the Los Angeles Rams after latching on as an undrafted free agent out of Oregon. He's following new head coach Kevin O'Connell and offensive coordinator Wes Phillips to Minnesota.

Schlottmann, who can play guard and center, played the last four seasons for the Denver Broncos. He went undrafted out of TCU and has seven career starts.

Berry ranked eighth in the NFL last year with 27 punts inside the 20-yard line. His gross average of 46.5 yards per punt was the second-best in Vikings history, in his first season with the club.