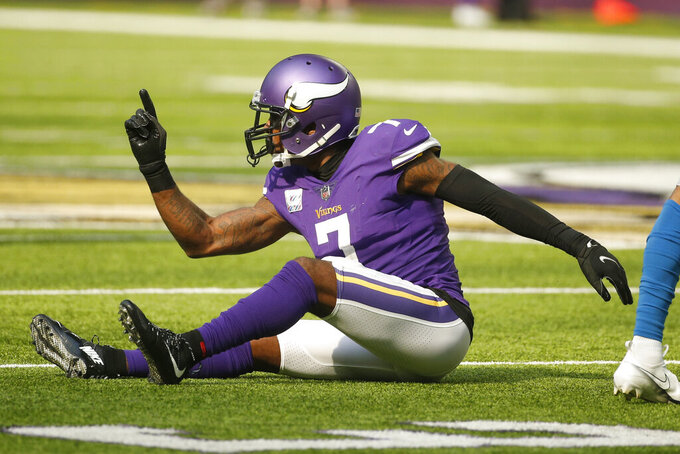 Minnesota Vikings cornerback Patrick Peterson (7) reacts after breaking up a pass during the second half of an NFL football game against the Detroit Lions, Sunday, Oct. 10, 2021, in Minneapolis. (AP Photo/Bruce Kluckhohn)

MINNEAPOLIS (AP) — Minnesota Vikings cornerback Patrick Peterson was placed on injured reserve on Monday after hurting his hamstring against Carolina and must miss a minimum of three games.

Coach Mike Zimmer said the injury was not believed to be season-ending, so the 11-year veteran Peterson will be expected to return at some point during the second half of the schedule.

The Vikings (3-3) have begun their bye week, but the absence of their best cornerback will be felt with a daunting group of opposing quarterbacks waiting for them after the break. They face Dak Prescott (Dallas), Lamar Jackson (Baltimore), Justin Herbert (Los Angeles Chargers) and Aaron Rodgers (Green Bay) in their first four games after the bye.

Peterson was hurt on the first play of the game-tying touchdown drive by the Panthers on Sunday, after covering D.J. Moore on a deep pass that fell incomplete with 2:03 remaining in regulation. Peterson tumbled out of bounds and clutched the back of his right leg in pain, before needing help to walk off the field to the opposite sideline. The Panthers then moved 96 yards in 10 more plays to force overtime, before the Vikings prevailed 34-28.

Cameron Dantzler, who was a starter as a rookie last year before the Vikings signed Peterson and Bashaud Breeland in free agency to shore up the position, will move into the lineup next to Breeland. Mackensie Alexander is the slot man in the nickel defense.

“I feel fine,” Zimmer said. "Patrick’s played really well. We’ll miss him for sure, but Dantzler’s done decent and so has Breeland.”