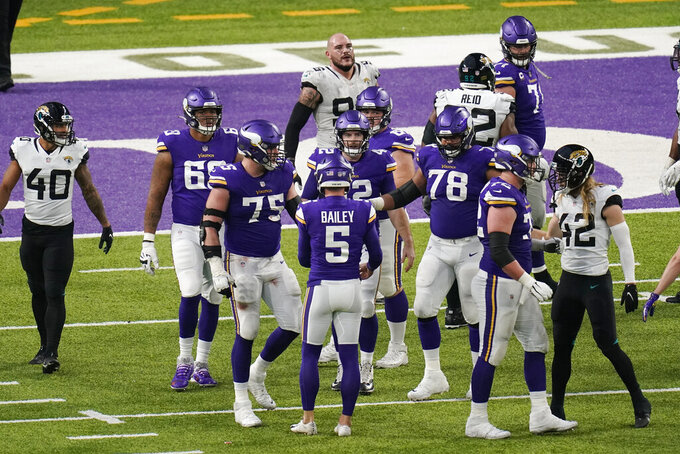 MINNEAPOLIS (AP) — The Minnesota Vikings have made it all the way back to even after their 1-5 start, fully in the running for the playoffs entering the final quarter of the season.

Staying in the picture will require far better performances than this.

Dan Bailey kicked a 23-yard field goal with 1:49 left in overtime after he missed two extra points and a 51-yard try with 13 seconds remaining in regulation, lifting the Vikings to a 27-24 victory over Jacksonville on Sunday.

“This team will fight. I do believe that. Obviously there are a lot of things we need to clean up,” said coach Mike Zimmer, who sweated out a 28-27 win over Carolina the previous week and a 31-28 loss to Dallas prior to that.

“The last two weeks you come in the locker room, and it’s more relieved than excited," Zimmer said. “That’s probably a good thing, because I think they know where they’re at in this world right now.”

Harrison Smith set up Bailey's redo with a diving interception at the Jacksonville 46, the fourth turnover of the game by the Jaguars.

“That’s a play I’ll be replaying in my head all night. Would love to have it back,” said Mike Glennon, who passed for 280 yards and one score in his second start, but had two interceptions.

The Vikings (6-6) got their fifth win in six games. Justin Jefferson topped the 1,000-yard mark just 12 games into his rookie season, finishing with nine receptions for 121 yards. Adam Thielen had eight catches for 75 yards and a score in his return from a one-game COVID-19 quarantine.

Kirk Cousins passed for 305 yards and three touchdowns, producing just enough clutch completions to make up for his throw on the first play of the second half that Joe Schobert returned 43 yards for a touchdown. That gave the Jaguars a 16-6 lead, their largest at any point this season.

Then the unforced errors kicked in. Glennon and Chris Conley each lost fumbles. The Jaguars had 10 penalties for 83 yards. Chase McLaughlin even had a chance to win it with a 62-yard field goal at the end of the fourth quarter that fell short.

"We’re going to continue to support each other and continue to keep fighting until they tell us that it’s over," coach Doug Marrone said.

Despite all that, James Robinson’s 1-yard run and Glennon’s 2-point conversion pass to Collin Johnson with 1:08 left in regulation capped a 10-play, 75-yard drive to tie it. That was the biggest blemish of the afternoon for a Vikings defense that lost 2019 All-Pro linebacker Eric Kendricks to an aggravated calf injury in pregame warmups.

Jordan Brailford forced and recovered Glennon's fumble at the end of a scramble in the third quarter. Ifaedi Odenigbo sacked Glennon for a safety in the fourth quarter after Cousins and Dalvin Cook botched a handoff on first-and-goal from the 2.

Cameron Dantzler, who intercepted Glennon for the first by a Vikings cornerback this season, pried the ball loose from Conley at the Jacksonville 44 with 5:39 left to set up Bailey's 48-yard field goal.

The Vikings have had several communication problems on offense the last two weeks. Cook, who had a hard-earned 120 yards on 32 rushes and 59 yards on six catches, was the intended receiver on the interception but never turned around for the ball.

"I’m going to go back and make sure going into our next game that every single time I’m calling a play that we all — all 11 in the huddle — are on the same page," said Cousins, who was sacked four times by a Jaguars team that entered with a league-low 11 sacks.

“It was just a goal that I wanted to achieve. I know it’s not likely as a rookie,” Jefferson said.

Glennon lucked into a 28-yard touchdown pass to rookie Laviska Shenault Jr. on the opening drive; an off-target ball glanced off cornerback Kris Boyd's arm and straight back to Shenault.

Collin Johnson leaped above Boyd for a 34-yard catch on the next drive, before Boyd misplayed a third-and-goal throw he could've intercepted in the back of the end zone. Boyd was later called for an illegal block penalty during a punt return, his third in three games.